Meet Nacht, Goddess of the Drow

With the association with the talents of Tony Puryear, I present a non-challenging alternative to the Drow Goddess, Lolth.  This is Nacht, Goddess of the Drow and the Dark Side of the Elvish Luminari. 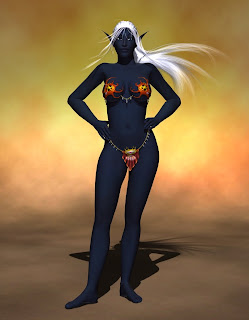 Nacht appears either as a beautiful, giant drow or as a human being.  She is worshipped by the dark luminari, which maintains a ruthless tyrannical reign over the drow in her name.  The dark Luminari paint her as a capricious goddess who is cruel and calculating and enjoys watching others suffer.  The Dark Luminari also paint her as forgiving to her true worshipers.  Something that isn't actually lost on her.

Nacht was truly one of the elvish pantheon of Gods, who along with the Moon Goddess Urania; were the deities of the Luminari.  In ancient times, during the Eladrin's reign, the Elven Court was united.  However, in the days when the Eladrin turned to the worship of the Sacred Word and found other gods, the Elven Court was worshiped by the lesser -- the Elves.

When the Elves came to Galatea, there was a distinct Schism between the light skinned Fair Elf Illuminati and the Dark Skinned Drow Luminari.  The result was a clash against Light and Darkness.  So the winners of the conflict -- the Illuminati -- say.  The defeat of the Luminari was the result that they drove them underground.  The Luminari then started a civilization of Drow underground, but even they have their divisions.  The society arose, built an underground empire, and is now gone decadent and is on the verge of crumbling to dust with the dark Luminari in complete control.
Posted by Elton at Tuesday, June 22, 2010