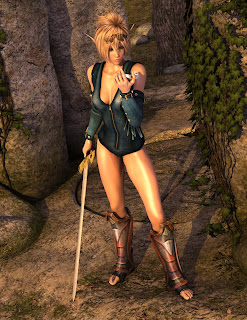 Sometimes, a psion Nomad and a Fighter can go together to make an interesting combination.  The Elocater prestige class in the Expanded Psionics Handbook (now Psionics Unleashed!) is meant to combine fighter and psion, or just a plain psychic warrior, in tandem.  Alarcawen, which means "Swift/Rapid Girl" in Quenya (thank you, good Professor) is an apt athlete who has learned the arts of fighting with a sword.  She is based on Wayne Reynolds' illustration of a Dromite Elocater.

Alarcawen is a psion first, warrior second.  She was always fast when she ran through the forested meadows of her home in Massalia.  It was rumored that no one boy, elf or otherwise, could surpass her speed while she was in childhood.  When it was time for her to study, she chose to be a psion rather than monk or a rogue.  She still learned how to fight with a longsword, and she became quite proficient in it.

During the Elf Troll wars in which the elves battled the trolls while some of them looked for a new home to settle in, she excelled in combat.  Pretty soon, she learned how to combine the might of a Nomad (a psion who specialized in psychoportation) with that of a fighter.  This attracted the attention of the Elocaters of Massalia, which were a very small group.  They've been watching the elf girl since she was a child, and now they took the girl under their wing and taught them their secrets.  She now scorns the Earth and does battle against her enemies using a combination of speed and mental alacrity.

She came to Phoenicia, the City of Psionics in order to root out her enemies.  The Dark Brotherhood, a society of assassins, had slain most of her living family and now she wants justice.  But sometimes, justice takes the form of vengeance when the Law can do nothing to bring the perpetrators to justice.

Dimension Step
An elocater of 3rd level or higher can slip psionically between spaces as if using the fold space power, once per day. The elocater cannot bring any other creatures with her. Her manifester level for this effect is equal to her elocater level. At 6th level, the elocater gains a second daily usage, and at 9th level, she can use this ability three times per day.

As long as the elocater is within 1 foot of a sufficiently stable solid or liquid surface, she can change her personal gravity with a thought (free action). As a result, she may move on walls, ceilings, etc. as if they were level floors, including being able to run, jump, and take 5' steps.
Personal gravity is constantly active, even when unconscious, unless the elocater deliberately suppresses it (a free action), is heavily encumbered, or is slain. If the elocater is carrying a medium load or wearing heavy or medium armor while using personal gravity, her speed reduces to 10 feet per round.
Scorn Earth

At 1st level, an elocater’s feet lift from the ground. From now on, she can float a foot above the ground, but still move and act as if she were standing on solid ground. At distances greater than 1 foot from any sufficiently stable surface, her speed diminishes to 10 feet per round, but she can move in any direction (including straight up or down). Melee and ranged attacks suffer increasing penalties as if she were the subject of the defy gravity power.
Scorn earth is constantly active, even when unconscious, unless the elocater deliberately suppresses it (a free action), is heavily encumbered, or is slain. If the elocater is carrying a medium load or wearing heavy or medium armor while using scorn earth, her speed reduces to 10 feet per round.
Spatial Awareness
Beginning at 2nd level, an elocater's hyperawareness of spatial relations lets her use the battlefield to her advantage. When she attacks with a bonus from higher ground or is flanking the attacked enemy with an ally, the first attack she makes against that enemy each round gains a +2 insight bonus to her attack roll and damage roll (if the attack hits). Furthermore, due to her ability to reorient herself, enemies no longer gain a bonus when attacking her from higher ground. At 5th level the insight bonus increases to +4, and at 8th level the insight bonus increases to +6.
Terminal Velocity
As long as either personal gravity or scorn earth is active, if the elocater would be in a position to fall (for example, stepping over a pit), she instead hovers at her current position, as if standing on solid ground. As a move action, she can safely float or jump down 30' (she can float down an additional 30' per additional move action spent in this way).
Posted by Elton at Saturday, July 30, 2011

I recognize this is a little dated, but I was looking for information on elocaters and found this character. She looks good, but she's not quite legal: inertial armor is an armor bonus, and therefore doesn't stack with her leather armor. Off the top of my head, the simplest fix would be to replace that power with force screen, which would provide a shield bonus.

Again, begging your pardon if I'm blowing dust off something long forgotten. Have a good day. :)