For Queen and Country! (Forgotten Realms Campaign /w RMFRP and played on OpenRPG!)

The Moonshaes. For years, High Queen Alicia Kendrick rules over a United Moonshae Isles. The Moonshaes are at peace and at balance. Still this has attracted the attentions of malefic gods. One such God, Bane, looked over the Moonshaes and their Unitedness and began to hatch a plan in which freedom will be severely restricted.

Malar, however, senses the thoughts of the people of the Moonshaes, and Correllon Larethian is constantly being petitioned to raise the city of Kandor from it's watery grave. But, when Kazgoroth stalks the Moonshaes, is anyone truly safe? 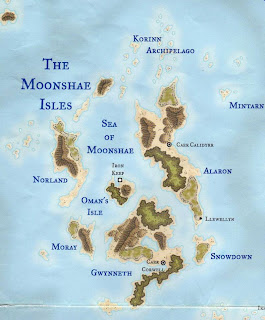 For Queen and Country!
For Queen and Country is a campaign set in the United Moonshae Isles. Player characters are encouraged to fight for the Moonshaes and their actions to keep the people safe from all threats: Internal and external, mundane and supernatural. Fight for Honor, Glory, and of course the Queen and your Country! 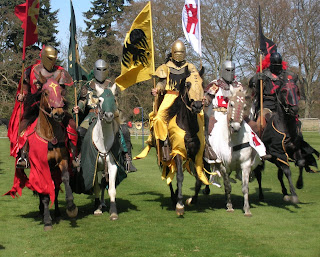 The Campaign is set in the Forgotten Realms kingdom of the Moonshae Isles!

* Play a Knight or a Housecarl and do battle with Sword and Shield.
* Be a mighty Magician and fight the Moonshae's enemies with magic.
* Take the role of a Druid and protect and preserve the Balance.
* Or take any number of roles!

* Be a Llewyrr elf and see what life is like outside of Myrloch Vale.
* Take the role of a gruff dwarf, a noble savage orc, or a rural halfling.

The Campaign is ran like a T.V. series. If it were actually shown on T.V. (and everything got past the *insert expletive here* censors in Renton) it would be an Ensemble Show with an open-oriented format. You play characters who defend the Moonshaes against any threat.

The theme of the show has to do with bravery and honor against dishonor and cowardice. The tone of the show is that it takes on the tone of Ivanhoe (by Sir Walter Scott) and the Arthurian Saga (various authors).

* The game is played on OpenRPG (Server: RPG Refugees).

This is a game of Intrigue, Excitement, and Roleplaying. It has an undertone of Epic Medieval Movies like The Adventures of Robin Hood, Excalibur, and of course, Ivanhoe (1952, 1980, and 1997).

A style that can be replicated with D&D 4e but with great difficulty [its very difficult, if you know anything about 4e and the Medieval Romance genre -- the two are incompatible in certain ways]. And since King Arthur Pendragon (4th Edition, ironically) is a rather complex game to set up the FR for, the game system that is most appropriate is Rolemaster Fantasy Roleplaying (RMFRP) or Rolemaster Classic (RMC or RM2).

Rolemaster has a few things going for it:

* Its the most realistic FRPG still in print.

* Character generation allows you to create truly unique characters: in knowledge and ability.

* Dozens of character concepts can be created and supported by the rules. Including: timid nobles, Ladies who's only ambition is to marry a good man, and ESSENCE spellcasters who can train to strike at enemies, defend and lead others, instead of just to control enemies.

* Slower leveling. Rolemaster uses an easier way to level so as the characters don't get too big for the series' britches too fast (in D&D 4e and 3e, leveling is a bit too quick).

What are you waiting for? Join the campaign and gain glory for yourself and For Queen and Country today! 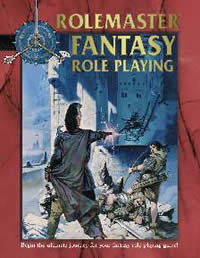 * If you are planning to play in this campaign, and you want to play a fighter, magician, mentalist, thief or cleric; then you will need just Rolemaster Fantasy Roleplaying (RMFRP) to start with.

* If you are planning on playing a Druid or Paladin, then in Addition you will need:
-- Character Law
-- Spell Law of Channeling

* If you want to play an exotic race (Fey'ri, Avariel, Drow, Tiefling, or Dragonborn) you will also need:
-- Races and Cultures

* Other recommended products:
-- Arms Law (2003)
-- The Armory
*little hint, this book has a table that allows you to throw around your favorite hench gnome!*
-- Spell Law of Essence
-- Spell Law of Mentalism

If I use Rolemaster: The Standard System?

You may use the Channeling Companion and the Martial Arts Companion. The Arcane Companion is off limits: there are enough Elminsters and Simbuls in the Realms.
Posted by Elton at Monday, September 06, 2010

Hey, this is Elevar, I'll need your email again. I seem to have lost it.