WHEN SATURN RULED THE SKY

Anciently,  Saturn, Venus, and Mars ruled the skies above our planet.  There was so star field and the sky was illuminated by the planet Saturn.  The planets in the sky were so imposing that many people had become heathen and worshiped these planets.

Using this cosmology in your campaign setting is quite easy.  Create a God Star, and have that represent your God of Time.  Be it Chronos, Ra, Shamash, or some other God.  In Pathfinder the God Star would have the following domains and sub-domains.

The worship of that God Star grants domains, like worshiping an Anthromorphic god.  Planet two, which was Venus, becomes the Mother Goddess.  She is like Kali, Aster, Tiamat, Inanna, Ishtar, Diana, Ashtoroth, Aphrodite, and Venus.  This planet would grant the domains of:
The next planet is Mars.  Represented as Ares, Indra, Horus, Huitzilopochtli, Thor, Mars, Star-boy, and Hachiman.  Mars is known as the scarred god.  The god that fought many battles and received many scars across the face.  Mars was the Hero (Ares), who fought the Dragon (Typhon) to save the beautiful Princess (Aphrodite).  His domains would be: 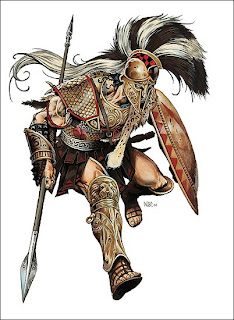 From there, you can add to your pantheon of Gods.  As the heathen spread over your campaign setting, the gods they worship in their cultures will multiply.  As this would be the pantheon in Neolithic times, in time you can add the Sun (Apollo) and the Moon (Artemis) and other gods.  gods for traveling, gods for wisdom, and a host of other gods.  However, the original sky worshiping pantheon would number 3 gods and it would be a tight pantheon.  Clerics drawing on the ancient pantheon of the skies can choose any two domains from this list: Chaos, Charm, Destruction, Glory, Good, Law, Time, Protection, Sun, Void, War.

This pantheon, drawing on the ancient skies, would be the pantheon to start from.  For those who are not heathens, I'll be writing an article on Psionics for Pathfinder/D&D 3.5.
Posted by Elton at Sunday, March 06, 2011