([I was going to force people to pick up the World of Warcraft Monstrous Manual, but it's no longer available on Drivethru and possibly RPGnow.  Since Blogger doesn't like tables, I will try to work around that with information on which infernal companions are popular and which can't be summoned.  Definitely Balors and Pit Fiends can't be summoned -- although a Warlock worth his salt might try to put them in chains.]

Warlocks tend to summon infernal companions as part of their repretoire.  Although, in theory, any Warlock of sufficient power can summon and bind a demon to him, there are a number of demons and devils that don't mind the service.

Combat
Darkhounds stalk their prey, shadowing it for hours until a suitable ambush spot presents itself. They then dart out, attempting to bring down their victim with overwhelming numbers and sharp teeth. 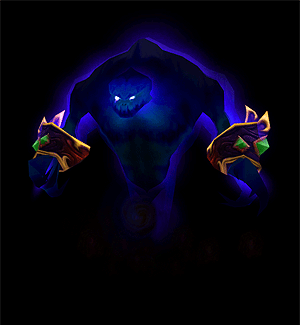 Combat
A voidwalker does not hesitate to follow even the most suicidal commands its master gives. A void demon's master often sends it to block a threat leaving the master free to cast spells or use other abilities without interference. A void demon takes its orders literally; when out of communication with its master, it continues to obey its last command, even if that command is tactically unsound.

Tormenting Strike (Su): The touch of a void demon brings a victim’s most painful memories rushing to the surface; for a brief moment, she can think of nothing but destroying the source of this mental anguish. Any creature with an Intellect score of 3 or more that takes damage from a void demon’s slam attack must attempt a DC 14 Will save. Failure means the creature cannot make melee attacks (even attacks of opportunity) against anything but the void demon for 1 full round.  The save DC is Charisma-based.

A voidwalker that loses its bracers must make a DC 19 Will save or return immediately to the infernal realms as if targeted by a banishment spell. If the voidwalker makes its save, it still takes a permanent –5 penalty to Strength, Agility, and Stamina.  Only a limited wish, wish, reality revision, or miracle can reverse this penalty.

Voidwalker bracers possess a hardness of 15 and 15 hit points each. Destroying a single bracer has no effect on a voidwalker.

Consume Shadows (Su): A voidwalker can absorb the darkness surrounding it, thereby healing itself of wounds; using this ability provokes attacks of opportunity. A voidwalker in total darkness can spend a full round concentrating (losing its Agility bonus to AC for the round), drawing the darkness in and producing a faint indigo light around its body. The voidwalker heals a number of hit points equal to its Hit Dice + its Stamina bonus (8 points in the case of the voidwalker presented above).

A voidwalker may consume shadows in shadowy illumination but heals only half this amount.  If the voidwalker takes damage while it using consume shadows, it must attempt a Concentration check (DC 10 + damage dealt) or fail in the attempt.


Spell Resistance: A voidwalker has spell resistance equal to 11 plus 1/2 its outsider Hit Dice (13 in the case of the voidwalker presented above).

If you want to use a table in a post I have had perfect results by typing up the whole thing in notepad where I can lay it out clearly, then deleting all the line breaks and pasting it into the post. If the entire table is a single line then it will appear properly in blogger, and without huge gaps before or after.