enlarging the World of Warcraft 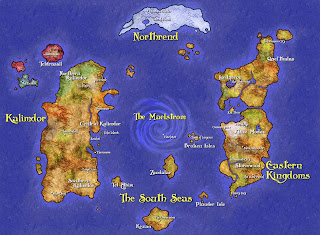 Azeroth suffers from detailed 3D animation in World of Warcraft.  It's highly detailed, but the world is so small. By comparison, the Game Daggerfall has a much larger world achieved with the Doom 3D Game Engine almost twenty years ago.

As a result, the World is miniscule compared to the world of Tamriel as presented in Daggerfall.  So, what to do?


At the very most, the whole of Kalimdor and Azeroth is only 25 miles north and south, and 15 miles east to West.  This is the dimensions of the Salt Lake Valley.  Roughly.  So you have about a dozen ecosystems jumbled together without rhyme or reason.

So, what to do?  Expand the two Continents of course.  A garden world should be as large as Earth to accomodate at least 2 billion people.  The Eastern Kingdoms are about as big as Western Europe and a bisected Africa.

Kalimdor is as big as the Eastern United States and part of South America.  Mostly a bisected Brazil.

Northrend is about the size of Canada.  The gulf between the Continents of Azeroth and Kalimdor is the size of the Atlantic Ocean.  Now, a planet as big as Earth will have run away weather and super typhoons if the continents are as big as Azeroth.  To stabilize the Weather, there is as yet an undiscovered Super Continent in the Forbidden Sea the size of Eurasia. Lodereon is about the size of France -- including the Western and Eastern Plaguelands.  Lodereon is split in half between the Forsaken in the West, and the Argent Dawn in the East.   The Scarlet Crusade controls portions in Loderon both West (The Scarlet Monastery) and East (the Scarlet Enclave).

The Forsaken control the Hillsbrad Foothills, which used to be the Nation of Daleran and the Kingdom of Alterac, and the Trisfal Glades.  The Forest of Silverpine is a war zone between the Foresaken and the Bloodfang worgen pack.  Undercity and Lordereon City is the size of Paris back in the 1700s.

The Hinterlands is the size of Hungary and is controlled by the Wildhammer Dwarves, a large population of High Elves, the Witherbark and the Vilebranch tribe of Forest Trolls.  The Raventusk trolls help control the Horde's lands in the Hinterlands.

The Kingdom of Gilneas is the most advanced Kingdom in the region with Everburning Lamps, firearms, Victorian fashion, and carriages. it's roughly the size of England and Wales from the Coast of Dover to Hadrian's wall.  The City of Gilneas is the size of mid-19th Century London.  The Kingdom is a war zone, divided among the humans, the Night Elves, and the Worgen -- both the ravenous Moonrage pack and the shape shifting Greymane pack.  The entire kingdom of Gilneas has been reinducted into the Alliance by the Night Elves. Across the Thandol Span, the Wetlands is about the size of Florida, Mississippi, and Louisiana combined.  The Wetlands is dominated by Bayous and mountains, with the Red Dragonflight based in the west.  The Twilight Highlands is about the size of Austria.  While Technically considered part of Khaz Modan by cartographers, the Twilight Hammer and the Black Dragonflight politically control the land.

The Dwarven Kingdom of Kaz Modan includes the regions of Dun Morogh and Loch Modan.  It's the size of the Austria-Hungary Empire (Austria and Hungary combined).  south of Dun Morogh and Loch Modan is a desert.  The desert that comprises the Badlands, the Searing Gorge and the Burning Steppes is as large as the Sahara Desert.   The Searing Gorge, however, is dominated by lava flows from 5 volcanoes.   The Bio Diversity there is almost nil thanks to the Black Dragonflight and the Dark Iron dwarves.   The Badlands has a biodiversity the size of the Sonora Desert, and the Burning Steppes is a bleak place that is like the Mojave desert and Death Valley combined. South of the deserts is the Medieval English (early 15th Century) Kingdom of Stormwind. The bastion of human power, the kingdom stretches from Elwynn Forest to the Redrock Mountains, to Duskwood, to Westfall.  The Kingdom is the size of Spain, and is technically a Nation with all of it's Armies fighting elsewhere (Alterac Valley, Arathi Basin, and Gilneas) and the Feudal Lords pre-occupied.  it's mainly a forest kingdom ringed by Mountains.  Since the Cataclysm, roving bands of human hunters in the forests have joined the fray.  Duskwood is mostly under control of the Nightbane pack of Worgen.  Recently, a number of Greymane worgen have come from Gilneas to reclaim the Nightbane worgen's reason and sanity.  They have resettled Raven Hill.  The Greymane pack's experiment with Nightbane worgen Sven Yorgen was successful, sort of.  Duskwood is the size of Romania.

Beyond Duskwood are the Deadwood Mountains and Deadwood Pass, the Swamp of Sorrows which is a huge Bayou about the size of the Czech Republic where the first battles between orc and man were fought.  South of that is the Blasted Lands where the Dark Portal is located.  It's about the size of Iraq.

Visit http://homepage.mac.com/prym for a bit more on distance, height, velocity and the physics model used for falling in WoW. It's pre-cata, but still applies for the most part.

Here is a summary of a few pre-cata length measurements.

Hey there folks, I just made my new Forum Site! Going to be posting some humorous PvP matches and other assorted World of Warcraft content! Come on over, check me out, and subscribe if you'd like! It's free... it's easy... and it makes me feel better about myself! :) so here's the link World of Warcraft Cheat and Chat Forum.

First, are you basing these dimensions on something concrete, or is it simply speculation? Second, did you ever do Kalimdor or did you just lose interest?