One of the difficulties of Roleplaying a fighter with capabilities is that most players would always make their fighters resemble one another. One of the interesting things to encourage roleplaying is to actually split what the fighters learn into different schools. Each country or nation has three basic schools -- a Military School, a School of Defense, and a School for streetfighting. So, fighters learn three basic different styles: 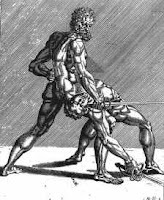 The Arte of Defence -- The martial art of Renaissance Fencing is also taught in several schools. The basic art specializes in personal defense with your rapier and then attacking when you see an opening. While Swordsmanship is fluid, the Arte of Defence is even more so. A fighter or combat oriented Rogue learns these basic feats:
Combat Expertise, Parry, Intricate Swordsmanship, Weapon Finesse, Weapon Focus, Improved Disarm, Improved Feint, Dodge, Mobility, Improved Critical

The Schools of the Nations!

There are several basic schools for each nation or culture that teaches swordsmanship.

The Grey Wolf Academy of Orc Martial Arts teaches honor in fighting, and to respect your enemy. Honor, the orc's virtue of Integrity, is the style of orc martial arts that mainly specializes in the Axe. Orcs learn axe fighting, and how to conduct themselves with honor. The Grey Wolf Academy teaches Combat Oriented Rogues Orc Martial Arts and Orcish conduct in fighting. The academy is maintained and run by the Silverfang Clan.


The School of Vipers
Rogue, Courtier

This is the orc nation's premier training academy for the Orcs' intelligence organization -- the Shadowed Hand. The School of Vipers teaches orc rogues the art of subtlety and orc courtiers the art of grace. The school is maintained and run by the Desert Viper Clan. The school teaches the Arte of Defense, but it also specializes in dirty tricks (sneak attack, Improved Evasion, spell stopping, and finishing moves).


The School of the Battered Axe
Barbarian, Fighter, Hunter

The School of the Battered Axe is a school specializing in strength and power. This is the archetypical Orc school, as the martial art of the Clan of the Battered Axe specializes in savage fighting, hacking, and overpowering your opponents. The School emphasizes brute strength, and runs orcs who are weaklings through strength training programs designed to build muscle and endurance.

More orc schools and more about these three orc schools will be provided in a future supplement: THE ORCS OF THE KNOWN LANDS

Academy of the Art of Mars
Fighter, Hunter, Rogue

The Academy of the Art of Mars is named after the pagan God of War, Mars. The Academy specializes in human swordsmanship, pure and simple. The school teaches battle techniques, survival on the battlefield, how to parry and dodge your opponent's attacks. The basic sword taught is the Arming Sword, and basic strength training is emphasized.

Department 7 is the teaching academy of Caithness' Intelligence agency, the Impossible Mission Force. Department 7 is where human rogues specializing in subtlety and assassination learn their trade. As the Impossible Mission Force focuses on missions of document recovery, shadowy intrigue, intelligence, hostage extraction, and assassination; human rogues are expected to be trained to handle many situations.

Donatello's School of Fencing is one of the most prestigious schools of defence in Caithness. The style taught is akin to Elizabethian Fencing -- specializing in two weapons: the rapier and the dirk, or the rapier and the fencing cloak. Nobles from around the kingdom of Caithness come to learn how to fight and also to learn style and grace in court. The school was named after Alexandro Donatello, an expatriate from the land of Genoa who brought Genoa's Art of Defence with him.


The Bastion of Light
Paladin

The Paladins, the highest paragons of human virtue and faith; are taught in the Bastion of Light. Here they learn the way of Faith and how their Faith in the Holy Light will increase their power and might. Pages and squires of paladins are taught virtue, morals, and ethics and how to uphold them. Paladins are also taught how to use many weapons: including swords and hammers and the best way to use their shields. They are honed as mighty warriors, and then they are inducted into the Knights of the Platinum Dragon; the Paladin Order in Caithness.

More on on these schools and more martial art schools will be presented in: CATHNESS

Next: Martial Art schools of the Elves
Posted by Elton at Thursday, November 19, 2009

I love the idea of Fighting Schools, a lot. It's something which was been covered quite a lot in older Dragon magazine articles - I'll try to dig out the issues for you. Fighting Styles are present in Mutants & Masterminds too. Here's a few from the core rules for inspiration. Other books provided many more as well: