Galatea and the Book of Advanced Magic

The World of Galatea would be a wonderful place if it used d20 Advanced Magic as well as the Magical Girl model of magic that 4e uses.  Although I don't agree with the Gamist direction that 4e has taken, it would be nice if 5th Edition would take the Roleplayer direction and the people at WoTC understood that they don't have control of D&D content, but they have control over how they contained it.

Branding is every thing, but branding content as your own is the wrong thing to do (such as hoarding Yaun-ti and Mind Flayers, for example).

Greywulf once asked about having Anthropomorphic races in 4e.  Well, Greywulf, I present to you the rules for Beastmen from d20 Slayers that could be converted into a 4e race. 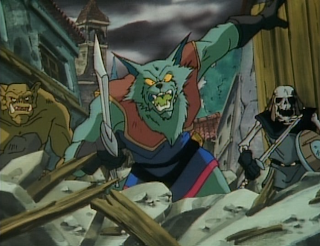 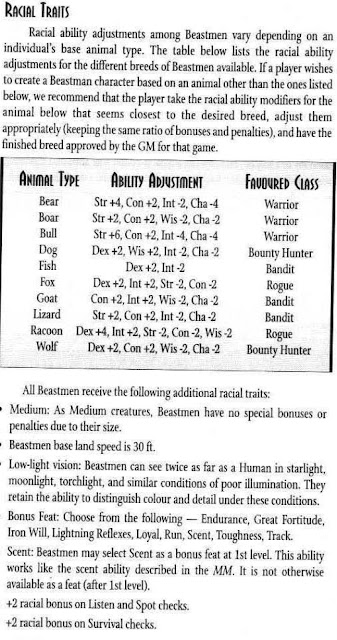 To be fair, the World of Galatea is based on a Men vs. Orcs scenario.  Yeah, it has elves, trolls, and stuff.  But it can also have beastmen.  :)

Anyway, the world using those rules will allow spellslingers to be spellslingers.  If I wanted just magical girls and boys, though, I would set up Galatea to use BESM d20 -- allow only the Magical Girl class to produce magic and not use the Dynamic Sorcerer class -- and set up a 4th Edition version of the world.

Since I'm more interested in making a world in which anime producers would see it as something based off the Slayers and Record of Lodoss War and not based off of Card Captor Sakura or Sakura Wars, or even -- dare I say it -- SAILOR MOON.  :)

I want the player who plays a wizard in Galatea to feel like they are spellcasting in a western fantasy environment.
Posted by Elton at Thursday, January 20, 2011

Excellent! They should convert over just fine. The world needs more anthro races :)