A continuation of occupational templates for Atlantis.

When Cain killed Abel in order to gain what he owned: his flocks and his wife; man's inhumanity to man had showed itself.  Since then, man has always worked hard to find ways of killing each other.  To our credit, we always worked out ways of defending ourselves from those that would do us harm.  During the Age of Leo, this is not even different.

Wandering Mystics from Khittan (China) believe in a circular philosophy.  Although they come from a barbarian Kingdom, they may wander to Atlantis or Lemuria or both to teach them the secrets of Mysticism.  Some Mystics feel that they have an adventurer's heart and join an adventuring party to see more of the world and to increase their knowledge of cultures outside of Atlantis, Lemuria, or Khittan. 
Restriction (Aura of Command to Undead) +2 Choose two Defects:
Easily Distracted (Corpses and Ossuaries) +1, Marked (scars) +1, Not so Strong +1, Not so Tough +1, Physically Unappealing +1, Reoccuring Nightmares +1, Skeleton in the Closet +1

Spells (Choose 12 slots of spells from 0 to second level, see Dyamic d20 Magic for DC casting costs), spells can come from these schools and from the Cleric list --
Abjuration, Divination, Conjuration, Necromancy, and Universal

Necromancy, the art of communicating with and summoning the dead, may have had its start in the Middle East.  Excavations have found that the Natufian culture had carefully buried their dead within their own homes and removed the skulls sometime afterward.  In Leonine Jericho and 'Ain Ghazal, the inhabitants there would plaster the skulls of their dead to create a likeness of the dead person.  There was definitely an Ancestor Worship cult in the Middle East.  This eventually spread to Europe with the building of Ossuaries, where the dead where kept.

So, Necromancers come from the heathen nations of Europe and the Middle East.  While not necessarily evil, his or her grim demeanor often does not win them very many friends.  Most would distrust the necromancer, seeing him as "unnatural" or even blasphemous in their dealings with the Spirit World. Nevertheless, necromancers can be quite useful, since they can create armies of minions from dead bodies, as well as gain information by speaking with the spirits of the departed. They will sometimes choose to become adventurers as a way to test their abilities, as well as to acquire powerful Items of Power to aid them in their grim research.
Thief (Adventurer Class) Since men became sensual and devilish there will be thieves who lie and steal. The thief is a lithe, roguish, and often acrobatic outlaw who lives by his or her wits, charm, and light fingers. Some thieves steal from anyone, while others prefer to rob only wicked folk. They make natural adventurers. Both their skills and their general demeanours are well-suited to a life of dungeon delving. In addition, thieves commonly have a weakness for wealth, which is often found in great abundance in ruins and similar locales, making them ideal places to explore — and loot. Thieves often have a sinister reputation. Even the noblest among them (and there are such unusual individuals) find it hard to convince ordinary people that they use their larcenous abilities only for good ends.  Consequently, thieves are often unwelcome in civilized settlements. Agents of the law are never far behind them, making it hard for thieves to put down permanent roots.
Psychic Warrior (Adventurer Class) 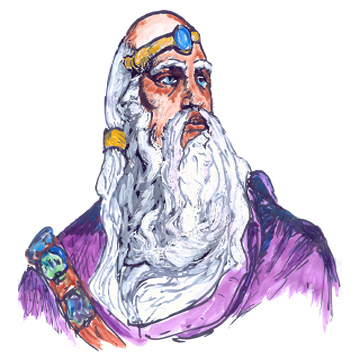 Whatever they are telling you, they are wrong about Man's ability to create and invent.  Mankind has had a big brain for at least 60 thousand years, perhaps more.  Atlantean Engineers are every bit as smart, or smarter, than our Engineers.  To say that the Stone Age lasted longer and there was a gradual evolution is a terrible conceit.  Many artifacts that are out of place (including the World Wide Language itself) attest to man's ingenuity in prehistoric times.

Atlantean Engineers were able to build the Pyramids, carve the first lion statue (the Great Sphinx) and calculate Longitude.  They were also able to build Weapons of Abomination (nuclear weapons) and create Nuclear Plants.  Also among their accomplishments was domestication: Atlantean Engineers genetically engineered the grasses (rice, wheat, rye, barley) into domesticated forms and create the dog, the feathered Troodon, and the Dairy cow.   They were able to perfect the crystal technologies that Atlantis was famous for.  Adventuring engineers are tech geniuses: specializing in maintaining mecha, doing surveys for Megalithic building, or doing field experiments.  Unfortunately, a fraction of Engineers are Mad Scientists.