My Impression of Skyrim 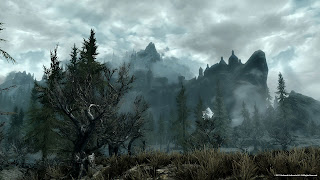 Skyrim is probably the best Fantasy CRPG that has ever been produced.  You still don't Roleplay as well as you could around the table, on open RPG, or any other virtual table, but Skyrim has the best engine for generating characters for a computer for a 1 player CRPG.

Not an MMO, Skyrim is the next generation in Fantasy CRPGs.  Based off of concepts made for Fallout 3 and Fallout: New Vegas, Skyrim is not based on Dungeons and Dragons, or it's leveling system, or anything of that nature.  Based on watching playthroughs on Youtube (which, if Anonymous has his way, will be illegal even though they are protected by the Fair Use Doctrine) when you create a character, you are no longer putting him in the straightjacket of a class.

Nay, for a one player CRPG, the straightjacketing of classed-based play makes absolutely no sense.  When you play a game like Skyrim or Morrowind, you should be able to be immersed and given the chance to do anything you like.  Pickpockets, learn some martial arts, or some magic.

As you level, specializations are handled by picking up perks, which grant you certain abilities (if you play 3e or 4e, think of perks as FEATS or POWERS).  Some perks allow you to duel wield spells and weapons.  Others allow you to summon more effectively, power up your spells, or block attacks more effectively, or be better at lock picking.


Anything is possible.  Even a pugilist.  When you create a character, you just input your name and race, customize what you look like and have a blast. 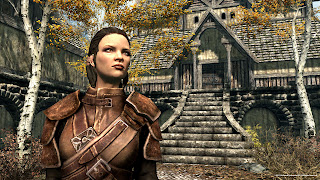 
In the main quest, you play a chosen of Akatosh.  As a Chosen, you are one of the Dragonborn, a mortal who is capable of absorbing the memories and knowledge of a dead dragon.  So, you aren't some half dragon that runs around looking like a human with a dragon's head on top covered in scaly skin.  You are either human, elf, orc, kitty, or argonian that has this power.

It is your job to free Skyrim of the terrible evil that is Alduin the World Eater.  Alduin, an ancient Dragon, has been awakening his children from their long sleep in pursuant of goals of his own.  Along the way, you will learn the ancient language of the dragons in order to cast dragon magic, or shouts.  You must do this order to cast Alduin back into the demonic world of Oblivion.  Along the way you will gain both allies as well as make enemies.  Some deserved, some undeserved.


Side Quests include:
* The Whitecloaks and the Imperial Legion, which gets you embroiled in the regions politics.
* The Companions -- which may turn you into a Werewolf.
* The College of Winterhold -- which is magic based and deals with the Lore of Magnus and the Psijic Order (who are a bunch of psions that have laid low all these years).
* The Den of Thieves called the Thieves Guild.
* The Dark Brotherhood that specialize in murder as a profession.
* The Bards College -- why not go learn how to sing?

There are the usual daedric quests, the divine quests, and quests related to the Forsworn.  The Forsworn aren't as bad as it sounds, but it looks like they are bretons who settled in Skyrim anciently.  There are the usual main city quests and village quests.  And a few miscellaneous quests.  You can even get married.

Like Oblivion, you can mod for the game.  While body replacers haven't been made yet, you can get retextures -- just for females so far. 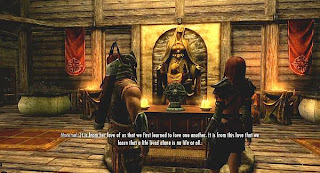 Q. What do you think of this Marriage in the Game Business?

I think it's great!  Marriage has been missing from the Elder Scrolls game series since FOREVER!  It isn't perfect, but it's wonderful that they are pushing this principle in the game.  Marriage celebrates the coming together of two (or more people in the case of Polygyny and Polyandry) and the principle of union of the sexes.  The main good thing about marriage in the game is that your character can have a traditional marriage or a gay marriage, or an interracial marriage or an interracial gay marriage.  Whether this scares people away from the game matters little, the game celebrates something good and pure.

Q. What is wrong with marriage in the game?

Currently only one Temple, the Temple of Mara, performs marriages.  All temples of all faiths should perform marriages.

Secondly, in the case of all, certain faiths have the right to marry certain couples. A priest of Akatosh won't perform interracial or gay marriages for instance.  While a priestess of Dibella should be able to perform polygamous marriages and gay marriages, for example (as Dibella is the real Goddess of Beauty and the tender Passions).

You can marry anyone of any race except Khajiits.  A Kahjiit should be able to be married in the game -- both a male and a female for completeness.  It casts a bad light on the race, as to say: "all Kahjiits are promiscuous."  Which isn't fair to the race as a whole.  It's a gross generalization.  While cats in real life are promiscuous does not mean that a race of living, breathing humanoid cats should be.  This means that a PC Khajiit won't be forced to marry into an interracial relationship if he or she doesn't want to.

You will be able to have sex with your spouse when someone can craft some custom animations that shows two people performing this sublime and beautiful activity.  Sex never was bad, but all sex is good and to see it performed in game between your character and his/her spouse would be a lovely thing in deed.   I can see fellow Christians decrying this:

Inspite of the problems, Marriage is a step in the right direction that makes Skyrim a more complete living breathing world.  Skyrim isn't a perfect world, the world here on Earth is a perfect world.
Posted by Elton at Thursday, December 15, 2011