One of the things that is good about Nuclear War is the destruction of the Copyright Law via the Destruction of the Supreme Government of the United States.  Nuclear War will wipe out those who abuse Copyright, but will allow some new storytellers to take the folklore of our age and finally have the ability to comment.

Now, I hear that some people are scoffing at Nuclear War, but you've got to know that man is stupid.  When man invented a weapon, they will use that weapon.  ITS INEVITABLE!!  Now, Yahshua stopped Global Thermonuclear War once.  Now, he won't stand in the way.  If you want to live, move out of the city, build a fallout shelter, and have 1 to 3 years of food storage.  Ahem, once Global Thermonuclear War is declared, Seattle will be covered by a mountain of sludge.  Los Angeles will fall into the Sea. Washington DC will burn off the map.  New York City will be ruins, and Salt Lake City will be under a very large lake.

Ahem, that's not even the worst of it.  But the best of it -- We will be converting into an economy based on sharing.  We will have a barter economy for a while, and certain laws will not be enforced.  The best of this is the Copyright Acts of America from 1913 onwards will have no one to enforce them.

I can write a Spider-man, Superman, Ms. Marvel team up without nary a Breach of Copyright Notice.  In the new landscape, these three characters will just be men and a woman with super abilities.  They won't be worshipped as gods, but they will have super abilities that they can put to use.

Superman, Ms. Marvel and Spider-Man rescuing survivors is a good story to write.  In my story, Spider-Man and Ms. Marvel turn to each other and become a couple, while Superman -- with Black Canary and Lois Lane being cared for -- does what he does best.  Sees to it that other survivors are safe and well.  So, why Spider-man and Ms. Marvel?

Didn't you like Spider-Man and Mary Jane Watson being together?  Well, yes I did. In fact, they were a perfect match made in Heaven. However, Joe Quesada had their marriage annulled in a brief moment of insanity.  Spider-Man and Ms. Marvel are also perfect together, however.  The two of them may not have a perfect compatibility score, but no one on Earth is perfectly compatible.  Even Yahshua had marriage problems (his wives -- yes, wives -- had to travel with him and I'm sure some of them didn't like to travel). 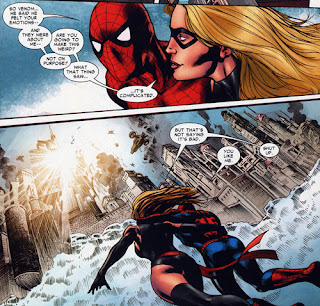 The possibility of a relationship is explored in Ms. Marvel #47, and the two of them bonded over fast food. And I thought, why didn't Marvel run with it?  A permanent team up between the two would be wonderful (it would be tres awesome if Spider-man was Polygamous.  Mary Jane Watson wouldn't be incredibly worried when Spider-Man is out there, fighting crime and risking his life because her sister wife: Ms. Marvel -- would be there to protect him).

Having survived in underground shelters, the Kents and the Parkers teamed up. Superman would be taking care of Black Canary, making sure she was safe and then he would team up with Spider-Man and Ms. Marvel to find survivors and to bring them to a place of safety (there are several counties in America that are designated as places of safety).

All three Superheroes will be tested at the limit, and their god-like status revoked as they find irradiated victims.  Kal'el would not be dressed in his super suit, and the job he has to do is so big that he can't save everyone at once.  Spider-Man and Ms. Marvel are in a similar vein.  The non-powered Mary Jane Watson and Lois Lane would be organizing the survivors and when Superman and Spider-Man bring in the last of them, they would be organizing a mass exodus to a place where there is food (i.e. Utah) with the three of them protecting the little band.

Yeah, nuclear war will be great. All the survivors will be friends. And you can steal the ideas of others, since you can't come up with any on your own, and no one will punish you.

You will not be going to heaven.

Perhaps, anonymous, maybe you should know that the copyright is already unreasonable for Superman, Spider-Man, and Ms. Marvel.

They've been around since I've been born. Superman for almost 75 years, Spider-Man for 50. The Nukes will hit Los Angeles and New York City. No more Warner Brothers, no more Disney, no more DC, and no more Marvel.

"The Nukes will hit Los Angeles and New York City. No more Warner Brothers, no more Disney, no more DC, and no more Marvel."

Your enthusiam is disgusting. It will only if cowards like you lie down and accept it. If your life is not worth fighting for, than give it up.

It doesn't matter how long something has been in existence. Leeches who are unable to create anything on their own should not profit on the works of others.

Do your own work, rather than crying about how you are unable to plagarize that of others.

Better yet, just suurender to your hate and let those who care about life and humanity carry on.

I think the idea of your story is actually fascinating. Why don't you join the fanfiction.net community and publish your ideas for other fans to read?

To me, this sounds like a much better solution than waiting, or hoping, for nuclear war.

Just be sure to attach a disclaimer to the beginning of your story/ies that states you are not the owner of the characters involved, etc etc etc.