Pathfinder Conversions: The Mage of World of Warcraft

One of my players for 4.0 stated that he wanted Wizards to pick up the WoW RPG license from Blizzard.  A great idea, but I stated that the two games (WoW and 4.0) are too similar enough in concept that you couldn't be able to tell you were adventuring in WoW or Forgotten Realms.  You've got your healer, tank, DPS, and Blaster; and you enter into a dungeon and have fun.

However, the whole purpose for the WoW RPG is so you can do stories outside of the MMORPG.  Like infiltrating the burning blade or actually participate in a Battle for Gilneas in other ways.  While it can be done with 4.0, most people at the Convention Table will just run a WoW standard game using 4.0, not deviating from the MMO.

Okay, rant over.  So, lets take a look at the Arcanist class and see what we can do with it.

In Pathfinder, the Wizard class is subdivided into nine different specializations.

Abjuration, Conjuration, Divination, Enchantment, Evocation, Illusion, Necromancy, Transmutation, and Universalist.  In World of Warcraft, the Arcanist is split into different schools as well -- Inscriber, Magician, Necromancer, and Warlock.  Each school, or path, is subdivided.  The inscriber deals with runes, glyphs, and sigils and are split between Arcane and Dark.  The Mage is split between Arcane, Fire, and Ice; while the Warlock is split between Affliction, Demonology, and Destruction.  As for the Necromancer --> there's only one specialization. 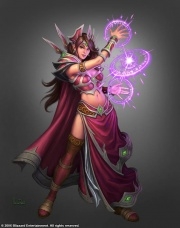 Lets start with the Mage.  The Arcanist gets all the rules that the Wizard has in terms of character creation.  But the Mage has only three specializations: Arcane, Fire, and Ice.

Arcane Mages are like your standard Evoker.  They revel in the power of raw magic and can use it to create and destroy with ease.  The signature damage spell is Arcane Barrage (A high level Arcane Missile spell).  So in Pathfinder, an Arcane Mage receives:

Intense Spells (Su): Whenever you cast a mage spell that deals hit point damage, add 1/2 your wizard level to the damage (minimum +1). This bonus damage is not increased by Empower Spell or similar effects. This bonus only applies once to a spell, not once per missile or ray, and cannot be split between multiple missiles or rays. This damage is of the same type as the spell. At 20th level, whenever you cast an evocation spell you can roll twice to penetrate a creature’s spell resistance and take the better result.

Metamagic Mastery (Su): At 8th level, you can apply any one metamagic feat that you know to a spell you are about to cast. This does not alter the level of the spell or the casting time. You can use this ability once per day at 8th level and one additional time per day for every two wizard levels you possess beyond 8th. Any time you use this ability to apply a metamagic feat that increases the spell level by more than 1, you must use an additional daily usage for each level above 1 that the feat adds to the spell. Even though this ability does not modify the spell’s actual level, you cannot use this ability to cast a spell whose modified spell level would be above the level of the highest-level spell that you are capable of casting.

Nice artwork and analysis.
DnD 4th is a table top version of a MMORPG, something the computer does better ; - (

Heck, even white wolf has gone out of the PRINT/ table top RPG business (np profits - paper is expensive and sales are hard to predict).

Please do me a favor and place a random comment on MY blog as I have recently changed setting and am unsure my comment section is still up and running (sound of crickets chirping ; -)

I'm going to disagree with you on a few points. The fact is, Arcane Mages and Frost Mages don't exist separately in Warcraft Lore. They're combined both in the Blue Dragonflight and the Magi of Dalaran. Compared to play however, the Mage class as a whole could be seen as Evokers from a pew-pew perspective. Though, technically, Arcane energy is not created, but summoned from the Twisting Nether. Anyone who plays a mage as their main however knows that you can't look at them from a merely pew-pew perspective(locks and hunters are easier to play in that regard anyway). I'd actually have to say that an arcane mage is a cross between a Conjurer(Ports, evocation, and conjure food), Transmuter(Polymorph, slow, Time Stop, Spellsteal), and Abjurer(Magic shields and armors as well as counterspelling). Fire magi exist in theory in Azeroth primarily among the Sindorei loyal to Kael'thas as Blood Mages(though there is some debate as to whether or not Blood Magi are Fire Mages or Destro Warlocks). Anyway, your version is a really cool idea thus far and I'd love to know how your version plays. :D

Conjuring portals, the ritual of evocation, and conjuring food -- to transmutation and alteration, and abjuration -- the Mage is no less differentiated by either using the Ether, Fire, or Ice as his battle tools.

out of curiosity, are you using the Cata talent trees or the pre-4.0 patch trees? The 4.0 patch removed a lot of the utility of mages(and most other classes for that matter), creating a much more homogenized and combat oriented game.