Alright.  I don't claim that I wrote Rifts, I couldn't write it the way that Kevin has even if I tried.  He put everything in it, including the Kitchen Sink.  So, if I ran around saying that I wrote it, everyone would know that I didn't and I'd look like a fool.

But then I think Siembieda is a fool anyhow for instituting a fanwork ban and a ban on Rules Conversions.  He lives on a planet with an Internet. He lives on a planet with a copy machine so efficient and so undiscriminating that his attempts at preventing everyone from using his world their way makes him look foolish anyhow.  But who's counting?  Putting a trademark on everything in the book is really stupid anyhow since Copyright Law does not cover rules on how to play a game.  (Sorry, Kevin.  But at least you wised up and release PDFs when WotC went DUMB!)

And creates a good case to get rid of Trademark Law.  It's an abuse of the Trademark Law to trademark everything in your game system.  Duh!  Thus here is my version of Rifts.

Okay, I think that's everything you'll need.  Since in the Shadow Chronicles, the REF goes out to find Rick Hunter to bring back the SDF-3, you can expect the SDF-3 returning to the world of Robotech Earth.  Doesn't mean that some of the Izacuchi space carriers defolded outside Rifts Earth.  Along with their counterparts in the Macross world.

Players would be members of the REF or the UN Spacy, which merged together as one organization at the Time of Rifts Earth.  They built a new Moon Base which to stage patrols around Earth Space.  The REF and U.N. Spacey will establish bases on the Earth as well to face the new threat -- Atlantis. There are four major bases in North America and one major base in what is now Argentina.  Yes, Mutants in Space is totally ignored and Earth Space is defended by the U.N. Spacey and the REF.

The four bases are located in --
* The Adirondack Mountains.  This is a U.N. Spacy Base.  Here, U.N. Spacy Mecha are manufactured at a secret location.  The base is actually located around Hurricane Mountain.  Mecha produced is the Variable Fighter VF-2JA Atmospheric Fighter and the Valkyrie II VF-2SS Standard Space Fighter.

* The Uinta Mountains in Utah.  The U.N. Spacy took over the old Flaming Gorge Dam and got it operating again.  The base is located outside Vernal, Utah in Dinosaur Country.  Here, in a secret factory, REF Mecha (the Alpha and Beta Fighters -- VAF 6C, VAF 6J, and VAF 6R, along with cyclones) are mass produced and tested over the Salt Lake Desert and the Salt Lake City Radiation Zone.

Salt Lake City suffered two earthquakes within fifteen days of each other before the time of Chaos Earth.  After two megaton bombs fell on the city, wiping out millions, a third Earthquake happened and covered the valley with water from underground.  The People of the Desert don't exist in this campaign.  The REF found the old Dugway Proving Grounds -- used by the USAF for testing production jet fighters -- perfect for testing production Alpha and Beta fighters.

The U.N. Spacy only has a presence in Vernal and Park City.  Beyond this, the code of the New West reigns.  However, the U.N. Spacy has been working to unite the State.  But the State, let alone the region, has been hard to bring law and order to.

* Anchorage, Alaska Base.  Anchorage Alaska was destroyed during the nuclear exchange. 300 years later, the U.N. Spacy has taken the city and built a base here.   Here, the Metal Siren Valkyrie, the VF-XX Zentran Space Fighter, and the Mechanized Robot Infantry (i.e. Destroids) are mass produced.  The better looking part of the base is used as an embassy to deal with Lemuria and Agartha. 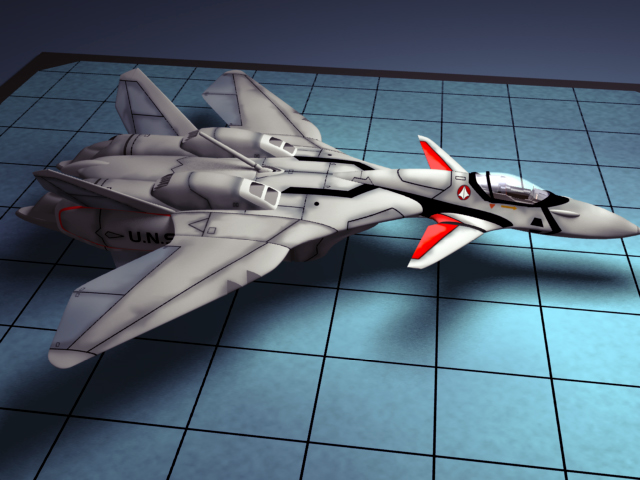 * North Argentine Base.  The U.N. Spacy has set up another base for Staging Operations against Atlantis.  This is the second base where the Enterprise and the Intrepid go to refuel and for repairs.

The U.N. Spacy recruits only those races who want to defend the Earth and are able to pilot U.N. Spacy mecha.  The races include:
Human -- see Rifts.
Zentraedi (Zentran and Meltran) Macross II RPG
from Conversion book 1
* Canine: Wolfen
* Elves
* Orcs (especially of the World of Warcraft variety)
* Faerie Folk: Most Faeries are very angry with the Spluggorth (spluggies) taking their people and enslaving them for PPE batteries.  Faerie Folk who work for the REF tend to be --
** Common Faeries
** Green Wood Faeries
** Night-elf Faerie
** Silver Bells Faeries

They make for great reconnaissance for the UN Spacy, and are typically equipped with miniature radios.  An UN Spacy/REF Faerie that signs up are used for reconnaissance and espionage.