Since I missed Nude Blogging Day, I thought I'd play catch up and blog today in the nude. Today, I'm going to rate two Atlantis campaign settings that I own (GURPS Atlantis and Avalanche's Twilight of Atlantis). The third, Atlantis the Second Age is not a game that I own.

But first, a discussion of Nude Blogging Day. As you can see from the picture on the left, my friend on the left is taking some time out of her busy schedule to blog nude on Nude Blogging Day (picture is from Canstock Photo). Basically, the movement is to show that nudity in and of itself is not sinful. To quote Cafe Philos:

Sadly, not everyone agrees that nude blogging is moral. There are people -- even influential people -- who think the good lady to the left of us is spinning society into dark moral decline simply by blogging naked amongst the foxtails. Those folks are morally confused. For reasons perhaps known only to themselves and their psychiatrists, they firmly believe great evil comes of simple nudity. Most of them were shocked to the bone when Janet Jackson's naked nipple appeared for two seconds on international television during the superbowl. At the time, the FCC was deluged with angry letters and emails from folks outraged that even a single nipple was seen by themselves and their children -- as if their children would inevitably grow up to be perverts and sex criminals now. Politicians demanded an investigation. The FCC responded by fining the broadcaster, then toughening its standards. Jackson's "nipple of doom" launched a national crisis. Is that what so many people think morality is all about? Naked nipples? Apparently so. At some point, all morally sane people should be asking themselves, "Do we really want a society that's crazy enough to take a nosedive into sheer hysteria over nudity?"

So, yeah, I do blog in the nude. When I feel like it, that is usually in the mornings or at night when I'm not disturbed. I really don't feel that it is sinful to be nude, in fact, it's quite a feeling of freedom. So, on with those reviews. 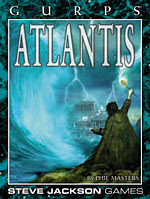 The first thing about creating a Campaign Setting about a piece of mythology that you are really passionate about is to do research and to learn what others have done. In the case of Atlantis, three products have been produced on the subject so far. They are GURPS Atlantis, Twilight of Atlantis, and Morrigan's Press' Atlantis: The Second Age. The first two are out of print, the last is still in print and supported by it's publisher.

GURPS Atlantis is the tour-de-force of the three Atlantis campaign settings. This is quite simply because GURPS Atlantis goes into more than a simple Campaign Setting, the book explains how the myth of Atlantis actually got started. Written by Phil Masters for Steve Jackson Games, GURPS Atlantis deals with the mythology of Atlantis by quoting directly from the source material: i.e. Plato's Critias and Timaeus. And then discusses whether or not the myth is true and it actually happened. It also goes into the literary and arcane legacies of the myth of Atlantis and how it has grown over time from a simple science fiction tale to a mystery of epic proportions.

The Atlantis myth has been used by science fiction, fantasy, and horror; three traditions of fantastic fiction. And the book delves deeply in the origins of the Atlantis myth and how it changed over the years in the first chapter.

The second chapter deals with the lands that we have lost. Tales such as Noah's Flood and Sodom and Gommorah are discussed along with Davey Jones' Locker and phantom islands and lands. And consequently, Ys, Mu, and Lemuria are also discussed.

Chapter three presents rules for underwater adventuring. This part was well researched, as the rules work in the GURPS game and can be adapted for other games. This chapter presents rules for venturing underwater and how the problems of great depths in the Sea presents for Engineering and Exploration. The chapter also goes into the history of Submarining and how technology has improved for deep sea diving.

Chapter four, five, and six presents three different campaign settings: The Orichalcum Age, which presents a campaign setting directly based on Plato's Timaeus and Critias; an Illuminati type campaign called The Secrets of Minos; and a Superheroic or Victorian Steampunk campaign. All three campaign settings are very good and provide a great way to game in Atlantis. GURPS Atlantis is available from eWarehouse-23, as it is out of print and only available in PDF form.

The book opens with a cover by Lorenzo Sperlonga, the fourth to sit on an Avalanche cover. The cover is a cheesecake cover to be sure, but can be interpreted as pornography by certain readers.

Part 1 of Twilight of Atlantis deals with the Ancient World that Atlantis exists in. This part is extrapolated from the Critias and builds upon the tale in a direction different than that taken by GURPS Atlantis. Basically, the meeting between Clieto and Poseidon is discussed, and how the five sets of male twins learned and explored their world. Then the five sets of twins would use their skills to build a mighty empire of epic proportions. This part also deals with Atlantean culture.

Part 2 deals with the rules section of Atlantis and is Open Game Content. Three new races are provided along with new monsters, equipment, and magic spells. The last part deals with Atlantean campaigns. Unfortunately, Twilight of Atlantis is so scant in its information that you need the resources of other gaming books to make up for what is lost. GURPS Atlantis, GURPS Greece, GURPS Mars and GURPS Egypt would be invaluable resources for the d20 System GM when using Twilight of Atlantis.

Next: I'll go into other areas of Research and how that may affect a campaign setting. I will also review Morrigan Press' Atlantis: The Second Age if I can get a review copy.