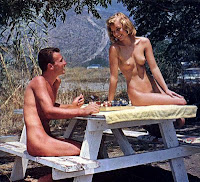 From Mercola.com and Globe and Mail.com:

An American study scheduled for a June release compared the health of some 1,200 female patients, some of whom took a vitamin D supplement while others didn't.

The number of patients who reduced their risk of cancer by taking a vitamin D supplement -- 60 percent -- was so unexpectedly high that some initially believed it to be a typographical error.

This study, and many similar ones, may force conventional medicine to re-evaluate its vitamin D recommendations. A deficiency in vitamin D figures into many diseases in addition to cancer. One researcher pointed out, "We don't really know what the status of chronic disease is in the North American population, until we normalize vitamin D status."

My Comment:
This has come out before I could present my argument on how Naturism is beneficial to the human body this Monday. I was going to argue that the Sun is actually beneficient for our bodies as our bodies use UV rays as a catalyst to produce Calcipherol, otherwise known as Vitamin D. Doctor Mercola, a doctor who is crusading for truth, has actually beaten me too it. I'd be a voice a among many to saying how naturism is good for the body and the psyche.

And I'm still going to do it this Monday. I'll have the weight of the medical profession behind me as studies have been published in the Journal of the American Assocation of Surgeons as well as Globe and Mail. Doctor Mercola said that sunlight exposure -- i.e. sunbathing -- can reduce cancer risk by 50 percent. While UCAN and other Cancer Prevention networks try to turn us into molemen, I'm happy that Doctor Mercola is telling the truth about sunlight exposure.
Posted by Elton at Thursday, May 17, 2007