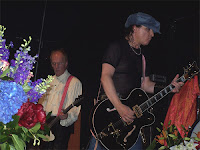 The movie, titled New York Doll, is this documentary about this influential rock star. It tells about his quick rise to stardom as part of a glamour rock band, and then it's meteoric fall. And when Arthur Kane hit rock bottom, he slapped his wife and jumped out of his kitchen window. And while he was recovering from the fall, he came across the Book of Mormon ad in the T.V. Guide and asked for a copy of the Book of Mormon. Two sister missionaries working the Los Angeles Mission showed up and gave him a copy and proceeded to tell him about the Church of Jesus Christ of Latter-day Saints.

And just some time after that, Arthur Kane was in the Family History Library working as a Temple Worker. But he always wanted to reunite the New York Dolls. It was his desire for a long time, and it was granted. They had a wonderful time in London. Arthur Kane dressed up and had a wonderful time with his band. However, he soon died of Leukemia after this. And this film, New York Doll, is a wonderful tribute to his life. If you are a New York Doll fan and you haven't seen this film, I would ask that you get a copy so you can follow the life of an old favorite. I wasn't a New York Doll fan, though. I was born in 1974; way too young to appreciate Arthur Kane's work.

Outside Links: Craven Lovelace, Punk Magazine
Posted by Elton at Tuesday, May 08, 2007