Desire is the Key to Success

Most papers on the subject of the divide between the rich and the poor will be arguments of the same nature. They probably lament on the situation of the poor and destitute and provide some arguments on how to solve the problem of poverty in America. However, I am not going to go that route. I am going to argue that desire is the key to defeating poverty in America. Understanding how desire is the key to winning the war on poverty is to visit Erwin Schrodinger and Schrodinger’s Cat.

Quantum Mechanics is the theory of the very small: it is a theory that tries to describe the nature and the world of the Atom. While Doctor Einstein changed the world with his theory of Relativity: both the Special Theory and the General Theory; Erwin changed the world with his thought experiment. Erwin Schrodinger didn’t think that the Copenhagen Interpretation of Quantum Mechanics actually described what happened. He though that the Copenhagen Interpretation left out the importance of Man’s own nature and Man’s interaction with nature. So he proposed a thought experiment.

The thought experiment went like this: your cat is penned up in a steel chamber, along with the a device that includes a Geiger counter, an atom of a radioactive substance that perhaps in the course of an hour it decays. But also with equal propability, it does not decay. If it does decay, the device discharges and through a relay shatters a small flask of hydrocyanic acid. If one left this entire system to itself for an hour, one would say that the cat still lives and no atom has decayed. The function of this system would express itself by having in it the living and the dead cat mixed or smeared out in equal parts.

Erwin also proposed that these cases that an indeterminacy originally restricted to the atomic domain is transformed into macroscopic indeterminacy, and can be resolved by direct observation. In short, Erwin was proposing that the state of the cat: alive or dead, was dependent on our beliefs. When Erwin Schrodinger presented this publicly, he was treated as a pariah and was eventually forced to recant his thought experiment because it proposed that one’s beliefs is a key factor in determining one’s own world. But whether Schrodinger recanted or not, the evidence still stands. Our beliefs and our desires affect our own world in ways that we cannot imagine.

To fight poverty in America, we need to understand how desire and our beliefs actually create our world and how we can consciously create what we desire. According to Schrodinger, a sapient and sentient being is fully capable of shaping his or her world according to his or her desires and beliefs. A sentient and sapient being is effectively someone who is a vibrational being, able to alter the vibrations around him or her to produce a desired result. In fact, a human being or some other sapient is a three part being consisting of the Mind: or Consciousness, the Spirit: or the Subconcious, and the Body: or the Experiencer. Our consciousness creates a desire through a thought, our subconscious brings this into being, and our body experiences this through our five senses. Then we do it all over again, in a never ending cycle of mostly unconscious creation. So, how does this combat poverty?

In America, poverty is treated as a disease or a drug addiction. Many solutions have been proposed to stamp out poverty in the country. Not all of them work because they don’t work from the inside out: they work from the outside in. The solutions include taking the homeless and putting them in shelters. Providing food for them, and making sure they are well fed. So far, no attempt has been made to change their beliefs or their desires for success. They are still impoverished and homeless. After all, he that does not desire wealth will not have wealth.

To actually solve the problem, one needs to realize that desire is the true key to success and one needs to combat poverty on a conscious level. Several key beliefs about money needs to be knocked down among the poor and replaced with new key beliefs. The belief that money is an evil, wicked thing; and that people who have all the money are wicked evil people must be one of the beliefs that has to be replaced by the direct opposite. The belief that money is good, and that the wealthy use their money for good purposes must be held dear in the hearts of America’s poor and destitute.

It is the mission of many success writers to do just this. They combat poverty in America by publishing success books on how to look at money from the angle of the wealthy and thus they are available for everyone to read if they so desire.

Poverty is a problem in America. This is not to be contested, a lot of people see poverty here in America. Putting up homeless shelters, providing debt counseling, and putting up low cost housing will not work in the long run. They are only short term solutions. But if one can change his or her beliefs and desires about money the problem of poverty in America can be and will be solved and everyone will be able to partake of the abundance our land will yield up to us.
Posted by Elton at Tuesday, March 04, 2008 No comments: 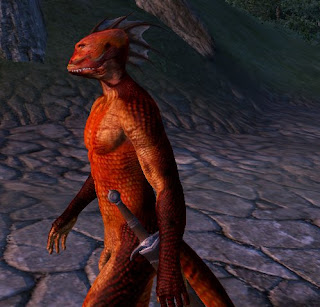 So I bought The Elder Scrolls: Oblivion by Bethesda Softworks the other day and had some fun with it this week. Let me tell you something, it's graphics are amazing. The game's graphics is a lot better than World of Warcraft's. Seriously.

The game has trees swaying in the breeze, rain, wind. . . it's an awesome game. So, I am going to talk to you about Skink.

Skink is my character in TES: Oblivion. As you can probably tell, he is a Lizard Man, or in Wizards' circles -- Lizardfolk ("man" is out of vogue for some reason in academic circles). Anyway, he is a reptoid known as an Argonian in the Elder Scrolls' world of Tamriel.

He is the son of Skink-in-Tree's-Shade: the famous Argonian steward of the Mages' Guild Chapter in Sadirith Mora (in the Imperial Provence of Morrowind). Skink is a 16 year old Argonian who has recently escaped from the Imperial Dungeons, following in the wake of the hero that forged the Staff of Chaos. He also happens to be a spellsword, combining knowledge of fighting with knowledge of magic.

Skink was born in Morrowind, or rather hatched in Morrowind. He has six brothers and sisters from two different creche layings. He was one of twelve, but five had become dead by the pressure of living as an Argonian. Argonians have the same lifespan as Man, living to about 70 years of age (or perhaps longer, living to a maximum of 130 years of age).

Skink grew up, however, away from Morrowind in Cyrodiil, the Imperial Province. His father would tell him stories of the Neverarine, the hero that restored Morrowind to it's proper glory by defeating the evil of Dagoth Ur. How the reborn Neverar would use magic and the sword to defeat his enemies. Inspired by the tale, the eight year old Skink wished for adventures of fame and glory while he was younger, desiring them with all of his heart. He wanted to be like the Neverarine and the Hero of Daggerfall that saved King Lysandus and allowed the Underking to finally die.

When Skink was fourteen, he had made a lot of enemies and even found romance for a time in an argonian teen named Cee-ja. Skink was not very popular growing up. As penalty for being too smart, Skink would be the brunt of bullying. One of the bullies that picked on him was a Breton boy named Jasper. Jasper and his cronies would often tease and bully Skink, driving his self confidence down into the ground (Skink has a low Personality rating: 30 [that roughly corresponds to a Charisma of 8]).

empowering to Skink. Skink effectively turned hOne day, while Skink was swimming, Jasper and the gang stole his clothes. Skink was forced to walk back to the Mages Guild completely naked. Although everyone laughed at him, and the humiliation was supposed to result -- Skink didn't have any trouble at all taking it. He walked naked in stride. He enjoyed his own nakedness, even though it caused many a jeer or even a threat. What was supposed to be an exercise in power by Jasper and his group turned out to beis ideas around about nudity. Skink from then on did not think about nudity as "bad" or "humiliating." But ultimately as a symbol of freedom and power is what nudity became for him.

The bullying stopped, for a while. Jasper and Skink even became good friends. Eventually, Jasper converted to skink's nudism and became a nudist. However, the both of them had their fortunes change. 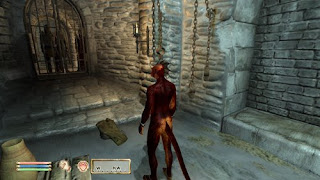 Skink hated the jail, he hated his cell, he hated his neighbor who would always tease him, and he hated everything for a period of two years. Eventually, Jasper was found innocent and let go. Jasper hoped for a reunion, but he left the prison. Skink was left, being tormented by his Dark Elf prison mate across the way. Skink also hated his clothes. He hated wearing them and he hated not seeing the sun.

Until that fateful day.

He is also, mostly by accident, the Lord Earl of Battlehorn Castle. Boy, do I have a tale to tell about that one! :D Skink is a Greek Hero, but mostly by accident. Looking over the Oblivion Walkthru, however, it seems that ultimately Skink's tale will have a bit of tragedy in it.
Posted by Elton at Sunday, March 02, 2008 No comments: