So far, Pheonicia had to go to war only twice since the Hellenic conquest. But the city had to defend itself from invaders numerous times. The army it has is mostly made up of non-psychics, but there are three units of Psychic Warriors that defend the city. The units are:

Ares' Sons
Ares' Sons is a Hoplite unit that is comprised of Psychic Warriors.  Armed with an aspis, greaves, and cuirasses the Psychic Warrior hoplite is often ready for battle.  The helmet they wore is the Corinthian helmet, and the weapons they bear are the dory (spear) and the xiphon (short sword).  The hoplite panoply is considered to be AC 14 when constructed out of bronze, and AC 16 when constructed out of iron.

Ares' Sons are located in a fortress built to train their number.  The fortress includes a temple to Ares.  Also called the Spartiates or the Sparti, Ares' Sons are relentless in battle.  When on the field, they are strike fast, and they strike hard.  They are decisive, and able to destroy the enemy in a relentless advance. 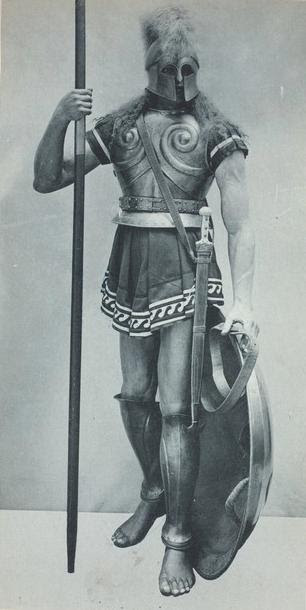 Ares Fortress
The fortress of Ares' Sons include the following:


Other rooms of the temple are dedicated to offensive tactical maneuvers, tactical studies of other kingdoms (they have a copy of The Art of War) and military history.


Nicodemos is the main trainer at Ares' Fortress.  He oversees the training of Ares' Sons units.  He's fifty seven years of age, so he trains his students well in the Martial Arts.  He has several assistants helping him.  Nicodemos also oversees sacrifices to the God of War, Ares.


Creche of the Mind -- Here, young children are subjected to the awakening of their psionic powers. Mostly the children of the psychic warriors themselves, the young children sleep here among resonant crystals in hopes of them developing psychic abilities with the onset of puberty.  If successful, they then will undergo training as a psychic warrior, soulknife, or psion.  Those that escape but develop psychic powers either gain the Wild Talent feat or develop into wilders.


Barracks and Messhall -- Here the unit sleeps and a mess hall is constructed to allow them to eat.

Psychic Surgery -- Its important that wounded soldiers are treated quickly.  Medicine is of Iron Age quality.  The army doctors employed here are as knowledgeable as Galen of Pergamon.  They are students of Asclepius and are dedicated to the healing of soldiers.  Some are clerics of Asclepius, others are psions specializing in psionic healing.


Command Circle --a psionic item that allows the commander of the phalanx to oversee how a battle at the fortress is progressing.

Staff -- the Fortress is fully staffed with all the staff one needs.  Armorers, a couple of cooks, a few architects, some weaponsmiths, and a few engineers to maintain the fortress.

Spartiates are warriors that are specially trained Psychic Warriors, Warriors, or Fighters that make up a special unit that is attached to Ares' Sons.  Inspired by Cadmus slaying the dragon and then sowing the dragon's teeth to create an uncommon warrior of Thebes, Spartiates are a special crack unit made up of those who are devoted to Ares' teachings.  In short, they are trained as an elite unit.

Having mastered the martial arts of the aspis, the dory, and the xiphon, a Spartiate would further train as commandos, having uncommon bravery in the face of greater odds.  They are also trained to handle most any terrain while fighting, and can fight not only in formation but out of formation.  A spartiate was a master of martial arts, and a dabbler in others.  The Spartiates have proven themselves several times over when the unit of Ares' Sons had battled invaders from the south.  PC Spartiates -- also called Errant Spartiates -- are expected to be in the field, learning their skills the hard way.  PC Spartiates are expected to be tough and to return to the unit to eludicate on what they've learned.  NPC Spartiates -- or commando Spartiates -- are expected to stay and drill and keep their skills in top shape until the next time they are called upon to go to war.


Alignment:  Most Spartiates are lawful in alignment.  While some are chaotic, most tend to be lawful because of the regimented lifestyle they live.   Spartiates that develop a chaotic neutral alignment during battle, however (say, develop psychoses because of battle) are often treated psychologically in the hospital ward.  Choatic evil Spartiates are often deemed untreatable or unredeemable (although there are exceptions) and still are found in the ranks, where it is hoped that they will die.

To qualify becoming a Spartiate, one must fulfill all of the following criteria.