An Atlantis in Eberron? 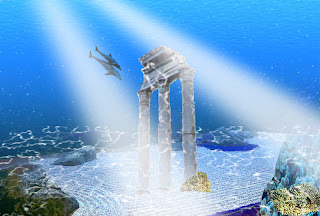 Well, its not impossible, actually. A city under the sea is a staple of the Genre. Keith and Wizards describe such a sunken city under the Aventi Isles near Sarlona. Called Aventi, it's Eberron's answer to Atlantis.

Not that anyone would try to go there, but it's there. Under the waves. Just waiting for a couple of intrepid explorers from Khorvaire to explore. It's nothing personal, just a way to spend a good couple of weekends looking around for an ancient civilization. After all, what will you expect to find? A stargate? :D
Posted by Elton at Saturday, February 16, 2008