If I were to run Star Wars SAGA RPG

If I were to run the Stars Wars SAGA RPG, I'd set it during the Knights of the Old Republic Era -- the same as the current, and new Star Wars: The Old Republic Massively Multiplayer Online Roleplaying Game is set.

So, why STAR WARS SAGA?

Star Wars SAGA is the true 4th Edition of D&D.  Really it is.  Looking at the rules, it's easier to get.  You've got five classes:

Jedi -- which covers the Jedi and the Sith.

Scout -- Chewbacca (although his Scout role wasn't really all up on that. )

So, why Star Wars: The Knights of the Old Republic? 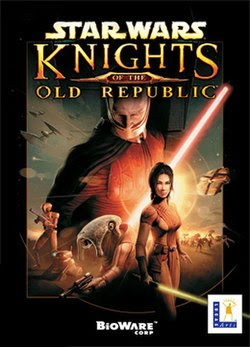 KotR is the Setting of the Jedi Golden Age.  Well, kinda.  The Force was balanced by the Jedi and the Sith.  Although to describe it as the Jedi Golden Age is laughable at best.  Especially when I have the unnerving feeling that the Jedi will most probably try to kill Jesus Christ for taking the Jedi Secrets and teaching them to the common people.

The Brahmin Caste tried to do it when the Christ visited India.  The Christ's only crime was to take the secret of the Brahmins and teach it to the Vayshas and the Untouchables.  Then the Christ got kicked out of many places -- Athens, Alexandria, Persepolis, Rome . . . And the Shelahites finally crucified him.  He didn't get kicked out of Britain, but he built the first version of Glastonbury church.  Ahem.

Well, I would set the campaign during the Knights of the Old Republic.  Player characters would be on the side of the Republic and fight the Sith Empire.  Adventures would take them to Tython, to Coruscant, to Ord Mantell, and other lovely places in the Galaxy -- including Alderaan, Tatooine, and Corellia.

So, how does the MMO work?

Basically, it's based on the World of Warcraft model (a lot).  In WoW, it's Horde vs. Alliance.  In this case, its set in the KotR Aeon and it's Republic vs. Sith.  Although in WoW, you can justify the Horde being good -- especially after the Horde has been cleansed by its blood taint and now they have two Paladin Orders -- the Blood Knights and the Sunwalkers to offset the Order of Argus and the Knights of the Silver Hand.  In Star Wars it's not so simple.

Changing the Subject:
Although, in a fit, the MMO says you can set your own destiny by gaining Force points and Darkside points through certain choices.  So it's possible to play a righteous Sith (although Ironically, you have to lie a bit to attain Righteousness among the Sith) and a wicked Jedi (which it makes sense that you have to lie and cheat to be WICKED among the Jedi).  The problem is -- George tells us that the Sith are evil incarnate.

The Galaxy is very Dichotomous thanks to Ashla and Bodan.   There is really no middle ground.  So, what do you do?  Gray out both sides.  Corruption is in the Senate, and some of the Sith are actually good guys and they see the Empire as the way to spread law and order across the Galaxy.  The only problem is --

All the Sith Lords are a bunch of backstabbing, half-brained, power hungry idiots who will sooner turn on each other or get their slaves to do their dirty work.

There are a total of 4 classes with their Dichotomy counter parts.

The Jedi Knight is opposed by the Sith Warrior.

The Jedi Consular is opposed by the Sith Inquisitor.

The Republic Trooper is opposed by the Imperial Agent.

And the Smuggler is opposed by the Bounty Hunter.

Advanced classes are these:

The Jedi Shadow has no comparison to a WoW class.  The Shadows are consulars who are the James Bonds of the Republic.  They wield double bladed lightsabers and have licenses to kill.

The Jedi Guardian is comparable to the Paladin in WoW.  It's about protecting and dispensing Justice throughout the Republic and the Galaxy.

The Scoundrelous Smuggler is comparable to the Rogue in WoW.

The Gunslinging Smuggler is comparable to the Cowboy in all the Old West movies you used to watch.  To get into the Gunslinging smuggler, you need to watch High Noon, The Shootist, and Support Your Local Gunslinger.

The Vanguard is comparable to the Warrior in WoW.

The Commando has no comparison in WoW, but if you have to compare it to a D&D class, the best way to  compare it too is the ranger.  The Commando is comparable to the U.S. Rodger's Rangers, who in the Revolutionary War, were a Crack Team of Elite soldiers of the Republic made up of rough and tumble Frontiersmen (and were one of the slights that turned General Arnold into a traitor).


The Power Tech bounty hunter specializes in using technology to his advantage.  He has no comparable WoW class.

The Mercenary Bounty Hunter is the Sith Empire's answer to the Warrior Class in WoW.

The Juggernaut Sith Warrior is a Dark Paladin.  Truly dark in every way, the Blood Knights -- although with a reputation for evil -- would find the Juggernaut to be a perversion of Paladin virtue.

The Sith Sorcerer, an Inquistor that looks deeper into the Force -- is comparable to the WoW Warlock -- but not in every way possible.  Some interesting parallels are the fact that they are also comparable to Shadow Priests in WoW.

The Sith Assassin are comparable to KGB Assassins in attitude.  Maybe worse.  They need no license to Kill.  Wielding double bladed lightsabers, the Sith Assassin is something you don't want hunting you.

The Sniping Imperial Agent are comparable to snipers in Rainbow Six.  The only comparable WoW Class is the Hunter.


So, how do you put all this together in a Roleplaying Game?

The Scoundrel class represents both Smugglers and Bounty Hunters.

The Soldier class represents the Republic Trooper, while the Scout class best serves the Imperial Agent.  It's a little more complex than that.  Bounty Hunters who are mercenaries are certainly Soldiers, while gunslinging Smugglers can certainly be Scouts.

The SAGA edition can certainly be used to replicate the ST:tOR MMO.  Just remember that the SAGA game system and the MMO are based on different game systems (the d20 System vs. the WoW MMO system -- Advanced Classes get TALENTS!).  You can't fully replicate one game with the mechanics of the other.  However, with the RPG, you can go places were the MMO can't.  The MMO is totally scripted -- in one Story, you are a Sith that gets involved with the Revanites in order to kill their leader and to destroy their religion.  However in an RPG, you can get involved with the Revanites and not kill them but become their leader.

Kind of different way of doing things with the RPG than with the MMO.
Posted by Elton at Tuesday, January 17, 2012