Back from Youth Conference 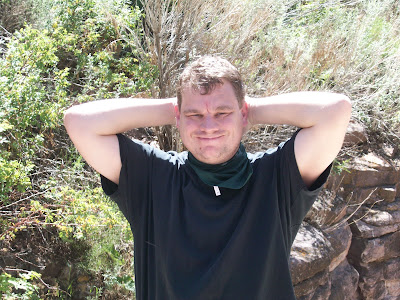 Sometimes, you need a break.

I had gotten that break when I had gone to the Hunter Fourth Ward (in the Utah Hunter West Stake) Conference this year. As young mens' secretary, and by extension the Ward Photojournalist, I had been taking pictures of our journey.

We left the Meeting House at about 4:30 PM, and made our ride to Duschane, Utah. From there, we road on to Red Indian Loop where our camp site was. On the way, I was taken at the beauty of the mountain top and at the copses of trees strewn about. I immediately thought of creating something from that breathtaking idea. It was just inspiring to a creative.

Arriving at the camp site, our camp was already set up and ready to go. We just need to make sleeping arrangements after dinner. I slept soundly, and everyone was excited. The bishop had to tell the boys to shut up.

The next morning, we had eggs and hash browns and the boys had built a fire. But before we got the canopy up, we had our first (and only serious) accident. Jack Allred had punctured his palm with a spike from the canopy. He called it his Jesus Wound and immediately had to treat it. Robby and Lacy then composed us into teams and told us the rules of the game. This year's theme was on Spiritual Treasure; and it had a pirate theme. Then we headed to Flaming Gorge to see the dam, and take the dam tour. With many dam jokes being said along the way.

We went river rafting after, and I had gotten a sun burn. Because of this sunburn, I deigned to go swimming the next day. The rafting was fun. Our rafting boat was the "dry" boat and the crew was composed of Robert Parker, a 68 year old convert and his first Youth Conference; Jack Allred, and Stephanie. The rapids weren't too bad, and we only got stuck on one. Jack had fly fished, and we went along at our own pace. I had taken some good shots of the Flaming Gorge canyon and the river itself.

Ah . . . At the final stretch, some girls had helped us get into the river. We had sandwiches for lunch, and then we had chicken, fried chicken, and rice for dinner. Robert Parker had sliced his hand open, while Jack had covered his wounded hand in salt. The salt acts as a reactive agent, cleansing the wound. Salt was used since the Stone Age, and can be still used today. After that, the youth played a little game. But my back was sore and I couldn't concentrate.

The next day, we ate some fruit with our breakfast. After the morning festivities we went to Lake Stienaker to swim. Everyone, except me, Jack, and Brother Parker; did a little swimming and some boating. The best part about the swimming is that Nathan Fairclough had dressed up as Captain Jack Sparrow and rowed to port. All the kids were happy, mezmerized, that Captain Jack Sparrow had arrived! One of the kids was buried in the sand up to his neck. After this, during the evening, we had navajo tacos for dinner and then we headed towards a cave.

The drive was only ten minutes, and we hiked down to a clearing. After another activity, we had to rappel down the cave. We nearly had a very serious injury in our group. One of the group ran down the cave face, tripped, and sommersaulted down the cave. He was miraculously stopped. For if he had not; he would have split his head open. The high point that Madeline had conquered her fear: the fear of dying from falling a long way. She rappelled down to the cave. I've made sure I've got three pictures of her.

After everyone had made it, Nathan Fairclough had rappelled and climbed down the cave's mouth as Captain Jack Sparrow! Then Lacy Densley's sister had given a great devotional on how the World can make something seem attractive: by making black look white. I helped out by pointing that Hollywood manipulates Latter-day Saints on the MPPA ratings issue; PG-13 movies are seen as okay, but I pointed out that the Spirit of the Law is what is really needed when choosing entertainment (i.e. a good example is the movie: The Passion of the Christ vs. say . . . Pirates of the Caribbean). After that everyone was awarded with the treasure for making it down there -- a copy of For the Strength of Youth and some candy. Then we climbed up the mountain, going the way we came.

The night had turned Spiritual, and many had given their testimonies of the Gospel, of Christ, and the Church. Then we went back to camp and I promptly went to sleep. By gum, I'm determined to GO TO SLEEP at a decent time!

This morning, we had pancakes, eggs, bacon, and ham. We ate up, we broke camp, and left for Evanston. We stopped at a dine-in Pizza Hut Pizzaria and had pizza. Then we made the long trek home. It was a good Youth Conference. Especially for myself.
Posted by Elton at Saturday, July 11, 2009