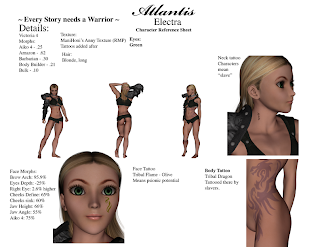 Every story needs a warrior.
My first Concept Art completed for my T.V. Show.

Meet Electra, formally Sakura.  Electra was once a psychic warrior soldier in the Atlantean army, thus she's descended from nobility.  However, it's a bad day when you act insubordinate to your superiors (not to mention arrogantly steeling the credit due her).  Electra was immediately sold into slavery.  She was unceremoniously stripped naked, tattooed with the word "slave" on her neck, a dragon on her body for her personality, and a flame on her face to show she has psionic potential.

bucked down from the highest turret in society to the lowest, Electra was sad and dejected.  She lashed out at her slavers, hoping her family would save her.  But they would not.  Her father is conservative and has much respect for the Atlantean Army.  He wouldn't use his influence to free his daughter.  So he left her there to wallow and rot in despair.  However, she kept up her fighting skills until the day she would be bought by a good man, or freed.
Posted by Elton at Friday, February 26, 2010