INthe most ambitious science fiction campaign ever conceived, and it must stay an OFFICIAL ghost work! I hate Wizards of the Coast.

During the beginning stages of World War II, where Hitler of Germany started to take over portions of Europe, the Illithids started to expand their empire to the Orion Spur.  The Illithids find Sol and the blue green planet known as Earth. 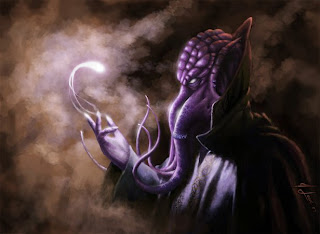 During the first air strikes in Britain, the Mind Flayers made landfall in the Orkneys and started killing people. They then invade Edinburgh and Leeds, and started killing men, women, and children; for food.  They also extradited what was left of the two populations into space.  The next day, they touch down in France and Germany and wiped out most of the population of the Rhineland.  It was on this day that the Axis Powers and the Allies became allies for it would be clear that the Illithids will destroy the population of the Earth.

Hitler, Roosevelt, Churchill, Stalin, and Hirohito all combined their forces together to repel the Illithid threat.  Using just planet based forces, they stopped the first invasion of the Illithids.  The Mind Flayers fled, however the fleet was just a small task force.   It wasn't the true Invasion fleet of the Mind Flayers.  Faced with unimaginable foes, the leaders of the Major Powers worried.  What would happen now, and how they would repel the threat?  The answer came just three years later . . .

With these four ships, and with several smaller cruisers, the Earthlings met the Illithid Invasion Force at the Planet Jupiter and managed to destroy them.  But that was only the beginning of the Terran-Illithid War. . . .

For Earth's mightiest Campaign has begun.  Not a campaign for conquest, a campaign for Survival.  It's forty years later, and new technologies have been developed - especially with Space Travel.  The Warp Drive had been perfected and Gate Travel allows the navies of the Earth to marshal their forces against the Entire Interstellar Illithid Empire.

The story of this war will be documented in pictures and I invite any and all artists to participate in the greatest Space Campaign in the Milky Way.  Render Illithid fleets, the Eladrin, the Humans, the Drow, and the Orcs and other aliens who participate in a battle royal against an evil so insidious it's hard to imagine.