The Defender of the Jungle 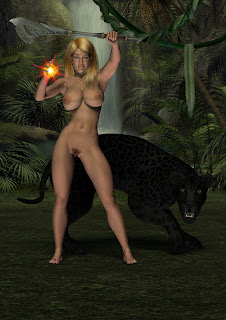 Laura was a citizen of Tyr until she discovered magic. She then learned the aspects of Preserving rather than defiling. She teamed up with an old druid to protect a forgotten jungle on Athas. With the druid gone, she is sole protector of that particular jungle.

This is an Earth Defender preserver. It is also a work in progress as I work in a Frazetta style (full nudity, but this blog is also about nudism). She is a Preserver (wizard) 5/Shaper 3 according to D&D 3e. In 2nd Edition, she's simply a Preserver with the Earth Defender kit. They are about as Green Peace or in some cases, Earth Liberation Front, as you can get in Athas.
I'll do up her stats later for 2nd Edition.
Posted by Elton at Friday, April 17, 2009