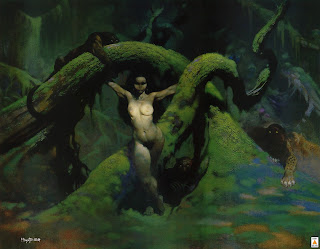 One of the best things about joining the Frank Frazetta Contest is this:

1. I haven't participated in a DAZ sponsored contest before.

It's something always kicking around that I liked Frank's style when you do Old Style D&D. The Known Lands came out of WoW, but it was also heavily influenced by Frank Frazetta and the good people at the Judges Guild. Classic fantasy (Edgar Rice Burroughs, Robert E. Howard, John Norman, etc.) is one of the biggest inspirations for Dungeons and Dragons than most people really realize.

Frank Frazetta produced paintings of gorgeous women (even though they were curvy), powerful barbarians, and fantastic locales. To this day, he's the biggest inspiration for trying a Stone Age (read: neolithic) campaign. How would a stone age campaign work?

The Neolithic Era is a fantasy, truly. We don't have much about it, except monuments like Stonehenge and archeological tools -- and a way of explaining all this through antropology's un-exact science. However, it's more than man living in caves, its about the start of agriculture, adventuring in a time when it was very dangerous for human beings (sabre-toothed cats, dire wolves both domesticated and wild, wooly mammoths, dire lions (panthera atrox) etc.)

Couple that with monsters (lesser evolved creatures -- h. habilus, h. eogaster, h. erectus), apes, and monstrous versions of normal creatures and you have a good campaign. You can make it even more fanciful if you add the dinosaurs.
Posted by Elton at Wednesday, April 15, 2009