Since announcing that the new Alliance race is the Worgen, I thought I'd take a crack at converting the Worgen to d20. But someone else has already converted the Worgen to d20 as a Player Race. I've been beaten to the punch, so to speak. 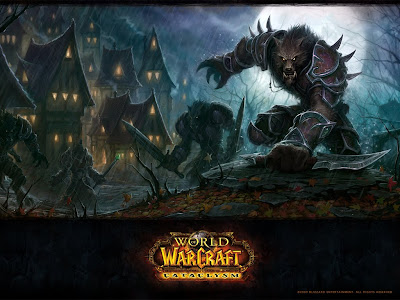 The Foresaken fear and revile the Worgen, and the Foresaken Queen Sylvanas Windrunner has marched an army upon the Gilneans and the Greymane tribe of Worgen. To help fight the Foresaken, the Stormwindans and the Darnassans come to their aid, but led by a secret Druid sect. The Druid sect bring Druidism to Gilneas, which a significant number of Worgen embrace. Now armed with the powers of Nature, the Worgen fight off the Foresaken and begin their new lives in the World of Warcraft! 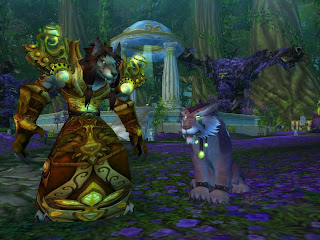 Faith: The Light and the Wyld. Some, or most of the Gilneans still belong to the Church of the Light. The Church of the Light thrives among the Worgen as part of the human heritage. But their beastial natures and teachings of the Druids of Darnassus has coverted a significant number to Druidism. The Druidic Worgen embrace the Wyld and lead a good number of Gilneans to spiritual peace with Azeroth.

Also, the Worgen may take Worgen levels to tap more fully into his Worgen heritage. A new Worgen Racial class is found at my resources page.
Posted by Elton at Saturday, August 22, 2009

ank you very much for your very great work on the worgen racial class. But you say that we can find the "Worgen Racial class at your resources page", but I can't find that page. Could you please link me or give the tip to find this page ? Thank you in advance !

Thank you very much for your very great work on the worgen racial class. But you say that we can find the "Worgen Racial class at your resources page", but I can't find that page. Could you please link me or give the tip to find this page ? Thank you in advance !

So who did this, and where's their page?

This looks very cool, I'd like to check out the "Worgen Racial class at your resources page" but don't see it. Can you please help me out here? I'm new to blogger.com and maybe I'm just missing it.

Also, just perusing your other gaming material - you do nice work :]
~S

I would suggest a Speed Bonus when shifting, not a rage...