Review of the Eberron Player's Guide 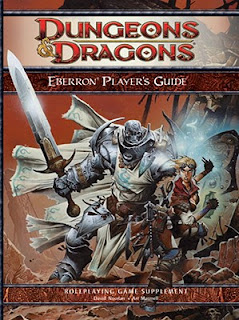 Byline: It still misses that Old Dungeons and Dragons magic.

The Eberron Player's Guide misses that old Dungeons and Dragons magic.  It suffers from the same writing style as the 4th Edition PHB 1, but not nearly so much.  There are several things changed that I don't agree with cannonically. Having the original Eberron Campaign Setting (and still in GOOD CONDITION!) there was some significant changes made to this edition.  Plus, Keith Baker wasn't listed as a writer, so I wonder if he had any input at all.

That being said, I don't think you need the DM's Guide at all if you have the original setting except for the monsters (Karnnathi Zombies, Skeletons, Dolgaunts, and so forth).  You can get most of the changes from the Player's Guide. The first chapter, Life in Eberron explains what Eberron is like today and yesterday.  This chapter introduces you to the basics of the setting. Bringing back some of that old magic.  It goes and explains the world of Eberron.  From Khorvaire and Sarlona; to Aerenal, Argonessen, Xendrik, and Everice.

It then explains the planes and how they work.  what life is like across Khorvaire,  how the governments work, what everyday life is like, how money works, and the languages work.  It's also how naming works.  They also talk about the gods and their alignment, and the other religions and how they work. It also goes into the current age, and the calendar.   Then all the other items of Eberron is presented towards the player's point of view.

The Races chapter goes into the individual races.  From changelings, to Kalashtar, to the Warforged; each of these are presented in the same format you see in PHB 1.  What a tragedy.  But each are described in detail (note, though, the Races of Eberron book for 3e goes into far more detail about these races).  Two of them haven't changed much to their 3e counterparts.  That would be the Warforged and the Changelings.  The Kalashtar, however, had an enormous change.  They are granted the bastion of Mental Clarity power.  They still have inborn telepathy -- but it's treated as a language.  IF you want to play Kalashtar to their greatest effect, buy a copy of PHB3 and the Psionics expansion book.  The only race that isn't presented is the Shifters in this section.  What's wrong, Wizards?  Can't you reprint the Shifters from PHB 2?

Beyond that, they go into the Core races and the not-so-core races and where they fit in Eberron. What is nice is that they tell you where everyone fits.  And the Dragonborn came from -- you guessed it -- Argonessen and are based in Q'Barra.

So, you get into classes and how they fit in Eberron in Classes.  You get dozens of paragon paths, and epic destinies.  You also get some new feats, equipment, and magic items in Character options along with some new rituals.

The five nations are talked about in The Five Nations chapter.  What is common knowledge about them, and how to work in the five nations and how the PCs relate to them. It also talks about Sharn and what is going on in the Mournland (Cyre).  It also talks about what is going on beyond the Five Nations and Beyond Khorvaire from a player's perspective.  Finally it went into a large amount of backgrounds.

Despite this, I think that I could run a 4e game with is, almost.  I have the original ECS, so I can't run out of plots.  Really.  Well, I guess.  Maybe.  No, definitely.  I don't like 4e, but I like this book.  If you want to run Eberron with 4e, this book is needed.  But if you have the original ECS, it's not worth it to spend the extra 10 just for monster stats.  You're best bet is to extrapolate them from the original 3E book.
Posted by Elton at Friday, November 12, 2010