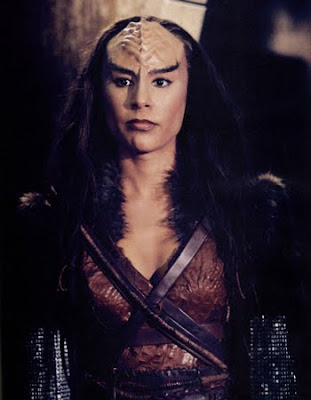 Today, in modern fantasy, the Orc is the fantasy version of the Klingon. Klingons, with their value on Honor and Society, have influenced how orcs are treated today in Fantasy gaming such as World of Warcraft. Today, there is little difference between an Orc and a Klingon except when you remove the bone ridges, add tusks, a little nose, and a wide jaw; then you color the skin green.


Orc Shaman by da-answer by ~warcraft on deviantART

Orcs in World of Warcraft and also in D&D are visibly influenced by the Klingon race. To a klingon, his honor is his life. To a Warcraft orc, honor is also his life. Klingons find glory in battle. In Warcraft, Orcs find glory in being Victorious in battle as well. Klingon society was pretty much one dimensional during the ToS series. Tolkien introduced his orcs as being basically one dimensional as well.

By Star Trek: the Next Generation; more of Klingon society was revealed. Kahless the Unforgettable was expanded upon, so was Klingon religion. They were shown to have a deeper understanding of Honor. And everything from martial arts, to becoming of age, death, marriage, to cuisine had been touched upon.

Orcs in Warcraft are shamanistic. They worship the Spirits of Nature and seek peace and communion with nature. Klingon religion is much more deist, even though the Gods were killed by the first Klingon couple (alluding to the warlike nature of the Klingon, or perhaps an approach to authority). Orcs in Warcraft have some things in common with civilization -- they have an intelligence agency (the Shattered Hand) and an element of demonic influence (the Shadow Council). However, I believe a lot more can be explained. You've already seen tidbits of what can be explained within Orc Culture of the Known Lands. As civilization grows within the Orc communities of the Known Lands, so does culture and so does Art.

But as you can see, the Klingons influenced Tolkien's race of miscreants. Thank god that Tolkien's Orcs, the name and the idea -- are public domain. Although different from the Orcs of Lord of the Rings, the ugly big green men are evolving and will continue to evolve. Perhaps, maybe, orc culture will come to be influenced by other fictional sources other than the Klingons. Maybe, if Babylon 5 is continued to be viewed, creators of tomorrow will see the Narns as a resource of inspiration for orc societies of later works.
Posted by Elton at Thursday, November 26, 2009