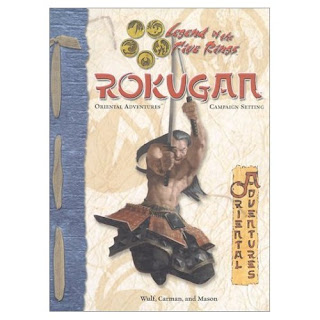 While thinking about the world of my manga, and thinking of Samurai, Rokugan had crept back out of my memories. I wondered what it could be like to run a Rokugan campaign again. After all there is a lot about Rokugan that does make it work for what it is designed for.

Secondly, its made by Americans who speak English. So the Japanese probably think it's funny. To be fare, the Japanese commit the same sins when they create High Fantasy European settings for anime. Tell me that Gourry and Lina Inverse are perfectly respectable names for European Fantasy: so really, L5R is laughable to them just the same as the Slayers anime series is laughable to us.

Still . . . A campaign in Rokugan is entirely possible.

System: The d20 System. Okay, those who like 4th Edition hear me out. The 4th Edition does not support Oriental Adventures at the present time. Classes like the Samurai, Courtier, and the Shugenja are really not supported by 4th Edition.

Time Period: The time of Empress Iweko. Everything is open out for me to use.

Races: Human, Nezumi, and Naga only. :) This is simply because there are no elves, dwarves, halflings, half-elves, or half-orcs in the setting. Nor spirit folk, or Hengeyokai. However, each Great Clan has several different families that have a favored class. For instance, the Akodo (Lion) family favors Samurai, the Bayushi (scorpion) favors rogues, and the Ide (Unicorn) favors Courtiers.

Flavor: I would like to do an Emerald Magistrate campaign. The players are out to mete the Empress' justice in the face of crime. So here's the break down:


Going beyond the Character Sheet
Bonus points are awarded for those who use The Way of the Some Sample Characters: This character set up is close to what I'm looking for. :)

Kakita Iaijutsu Duelist [Samurai 1]
Clan: Crane
Dojo: Kakita Dueling Academy
Social Benefit: +5 bonus to all Diplomacy or Bluff checks with any individual of the Samurai class who is of lower overall Character level than the student.
Training Benefit: Gain a competency bonus equal to half your Iaijutsu focus to your Intimidation checks with other Samurai.
Kata: Striking as Wind
Skills and Feats: Diplomacy 4, Iaijutsu Focus 4, Intimidate 4, Sense Motive 4, Spot 2, Listen 2; Know the School (Hoturi's Blade), Weapon Focus (Katana), Void Use

Spells known: 0 level - Be the Mountain, Cleanse, Drawing out the Void, Flight of Doves, Purity; 1st level -- Aura of Flame, Look into the Void, Path to Inner Peace