So, do to my game mastering style, there is some need for some of my adventures to come out.  I'm going to list a few ideas that I had: 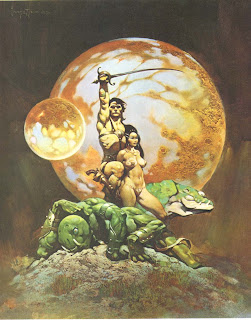 * Psionics Adventure: a simple psionics adventure set in a land that is liken unto the Levant.  Where the men and women wear skimpy, exotic outfits.  Something akin to leather briefs and harnesses (A harness is liken unto ERB's harness worn by Barsoomian Martians).

* The Great Greek Adventure: A pseudo-greek land that inspires adventure with Classical Gods demanding to be worshipped.  And an adventure set in therein.

* Mansion for sale: A mansion is for sale, however, it's cheap.  Which means that the person or people who bought it is responsible for clearing the mansion out of nasty monsters that are lairing there.  A twist on the classic adventure in a Dungeon Magazine -- Castle for Sale. 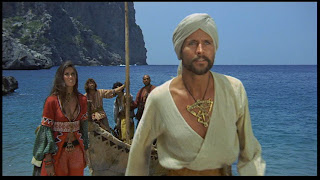 * The Dark Shadow on Cemetery Hill. Strange events are plaguing the little sleepy town of Salem.  Some blame the ghosts of Cemetery Hill.  The town hires the PCs to investigate the source of the hauntings, which is said to be a house that belonged to the Funery Priest.

* The Caves of Alazgar.  The Caves were cleared out before, but overtime the caves had become inhabited again by monsters.  The PCs arrive when the Caves' population of monsters have increased to critical stages.  And the PCs are called in to bring peace to the region.

* The Wadjet Eye.  Another adventure of an Arabian Nights vein, this time set in an Egyptian theme.  Everything goes well for the PCs until a fleeing thief drops a wadjet eye in their lap.  Mistaken for the thieves, the PCs are taken for a ride as they learn not only the original owner wants the eye back, but someone else claims it for himself as well.

I vote for The Golden Voyage of the Azgari. I'd love to see more Arabian Nights style adventures!

I'll outline that second, if other people want to see it. :)