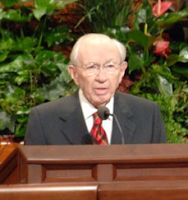 President Gordon B. Hinckley, who led The Church of Jesus Christ of Latter-day Saints through twelve years of global expansion, has died at the age of 97.

President Hinckley was the 15th president in the 177-year history of the Church and had served as its president since 12 March 1995.

The Church president died at his apartment in downtown Salt Lake City at 7:00 p.m. Sunday night from causes incident to age. Members of his family were at his bedside. A successor is not expected to be formally chosen by the Church’s Quorum of the Twelve Apostles until after President Hinckley’s funeral within the next few days.

Brother Gordon Bitner Hinckley was a great man. He was definitely a prophet, as mighty as Moses, Elisha, and Simon Peter. He enjoyed service to the Church for most of his life: having given many of the Proclamations to the World from the Messiah. As the leader of the Church of Jesus Christ of Latter-day Saints, the Messiah's own church, he presented the Church to the world. From the time he was President, many temples had been built -- exploding from very few to 132 Temples across the world (one in Ghana, one in South Africa, one in Boston, one in Hong Kong, one in New York City, etc.). Even though he didn't live to see the Jerusalem LDS Temple built (which is forthcoming and to be built by Latter-day Saints) his actions will lead for that to be built.

He presided over an Era of Temple Building, and the explosion of the Internet, and an era of increased faith and spiritual awakening all over the world. He was one of the greatest men today, as Theologian in Chief (not Commander in Chief). So, who will be the new President of the Church of Jesus Christ of Latter-day Saints? President Thomas Monson.

Labels: President of the Church, the Church of Jesus Christ of Latter-day Saints