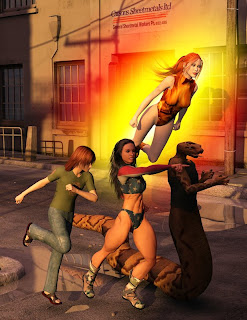 Story: Factor 1 is a Superhero Team that was incorporated by the Government to deal with threats that the police couldn't handle. I.e. rampaging metahumans. Evil metahumans have been stalking the good folk of Salt Lake City, and the real life Superhero community tried to stand up to them.

The result was failure except for four super-powered humans that repelled their attack. The result was that the four of them: Shaper, Ms. America, Thermique, and the Serpent; was eventually approached by the Utah Department of Homeland Security on the Factor Initiative. The Factor Initiative would sanction the four of them into a team that would handle any superhuman, or extraterrestial, threat to the peace and security of the United States.

Their powers are as follows:

Ms. America: Due to exposure to toxic waste; Ms. America has increased strength and durability. She fought during the Afgan War, and became a body builder and Pro Wrestler after her tour of duty. She was then subesquently transformed by "toxic Waste." But she actually volunteered for the Super Soldier program of the U.S. Army. She is married to a man who is not a U.S. Citizen, but a citizen of Guatemala.

The Serpent: The Serpent is a mutant animal who is a near human-rattlesnake. He can speak passable English except for a slur on his s's and sh's. He has heat "vision" and poisonous fangs. He is also warm blooded as part of his mutation. The Serpent is an expert on Kung-Fu.

Thermique: A French ex-patriot who is named Anne Chevalier. Miss Chevalier has thermokinesis; which allows her to generate an amazing amount of heat. She can fly, create fire, and project fire in a blast.

Shaper: He's perfect (his "ability" is actually a hyperactive Subconscious).
Posted by Elton at Friday, February 06, 2009