Interpeting the Apocalypse is a Multi-Million Dollar Business

Interpreting the Apocalypse of Saint John, and the prophecies of the Hopi Indians, Nostradamus, etc. is a Multi-Million Dollar Business because they can scare people and put fear of the end in their hearts (excuse my French!).  People have been made paranoid about the end of the next Year. 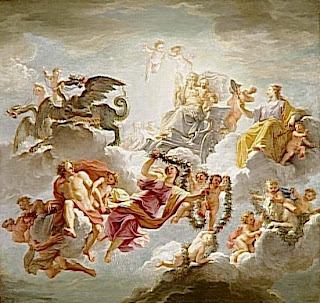 But really, interpreting the Apocalypse so you can scare people and have them glued to their sets?  Are you nuts?  Are you absolutely nuts?  Why would you even consider putting fear into people's hearts?  Because it's Sensationalism?

Yahusua Ha'Massiach (Jesus the Messiah) said that if we are prepared, we will not fear.  Preparing is understanding what is going to happen and make preparations for the end.  Yahusua said that he will do away with the Heathens that currently infest Israel, and there are so many Heathens it takes something like a Supervolcanic eruption (Yellowstone) or a Nuclear blast (Nuclear War) to clear the Heathen out of Israel (USA).

Your shelter should have about 40 ft. of material in order to stop gamma rays, essentially gravel, on all sides of your shelter -- especially the top.   You need a commode.  You need food and water storage for at least six months to a year, and you need sleeping quarters.  You will also need an electric generator to generate your own electricity and have a refridgerator and a freezer to keep some foods nice and cold (especially meats).

Here are some interesting signs coming after Nuclear War:

* The poles will flip, causing our own personal magnetic alignments to also flip as the poles flip.  This has the nasty side effect of stealing energy from our bodies; thus weak men will die.

* A planet will appear at our North Pole.  This planet is carrying one 1/3 of the Host of Israel.  Our kin will come down from the planet in vehicles built to protect them from Synchrotronic Radiation.  Then this same planet will perform a "docking manuever" with our own, causing a World Wide Earthquake.

* the Salt Lake Valley will be cleansed of fallout, and be baptized in Fire (Nuclear fire) and Water (water up from the ground during an earlier Earthquake).  The place will be made habitable for humans again -- as many fruits and vegetables can be planted there and they will flourish.

but you don't have to take my word for it.  In this era where hollywood capitalizes on making you sorely afraid for the end of the next year (December 21, 2012); you can gain reliable information on what is exactly going to happen and how to prepare for it by foremost reading the bible and looking up the Parowan Prophet's website.
Posted by Elton at Sunday, January 30, 2011

when did the USA REPLACE the nation of Israel?

Recall Israel was the Northen Kingdom that worshipped idols;
therefore, it was consumed by curel Assyria as punishment.

Judah was the faithful and true,
and they lasted less they one hundred years after the collapse of Israel.

If you are going to follow the law as a means of salvation -
you can not pick and choose; you must follow all the law.

The USA is not the new kingdom of Judah,
We might be the new Isreal . . .

"pride ges before destuction and anger before a fall."

We are not the new Kingdom of Judah. If anything, America can be interpreted as "Heavenly Kingdom."

The Israelites who live here are descendants of those people taken out of the Kingdom of Israel.

Yes , but when Isreal has a king that is is the son of David,
is that the beast?

"The beast was given a mouth to utter proud words and blasphemies and to exercise its authority for forty-two months. It opened its mouth to blaspheme God, and to slander his name and his dwelling place and those who live in heaven. It was given power to wage war against God’s holy people and to conquer them. And it was given authority over every tribe, people, language and nation. 8 All inhabitants of the earth will worship the beast—all whose names have not been written in the Lamb’s book of life, the Lamb who was slain from the creation of the world.["

I can answer your question now. And no, the son of David that is going to rule Israel (Palestine) isn't going to be a tool of the Beast.

Although the Ashekenazi believe that the American President is going to go into the rebuilt temple and declare himself God.

What is this science-fiction prophecy? Schientology?

I am very enjoyed for this blog. I feel strongly about it and love learning more on this topic .3D printing, commonly known as ‘Additive Manufacture’ is a form of rapid prototyping where models are made layer by layer without the use of moulds. I am so pleased to get this post article and nice information. I was looking forward to get such a post which is very helpful to us. A big thank for posting this article in this website. Click here Best 3D printer manufacturer company in China.