The Record of Lodoss War 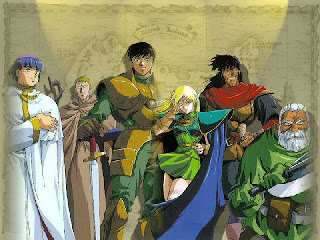 If you really want to see a series that is full of D&Disms, and is quite serious about its subject matter, the High Fantasy Anime Record of Lodoss War is perfect for your appetites.  The series chronicles the adventures of Parn, Deedlit, Etoh, Slayne, Woodchuck, and Ghim as they have misadventure after misadventure brought on by the Island of Marmo and Karla the Grey Witch.

The series itself is directly based on Dungeons and Dragons (BECMI or the real 4th Edition) where there is a Fighter (Parn), Cleric (Etoh), Magic-User (Slayn), Thief (Woodchuck) -- all human of course -- and a High Elf (Deedlit) and a Dwarf (Ghim).  The only character missing is a halfling.  As it happened the Dungeon Master of the original Lodoss War campaign came to America looking for inspiration.  He bought the Dungeons and Dragons game and went back to Japan.

He created the world of Lodoss and set his players on a series of adventures that were recounted in the pages of a Japanese Magazine.  The series takes a lot from the Lord of the Rings (are you really surprised?) as Ghim is actually based on Gimli.  The sad part, for Americans, was that the Campaign Setting was pitched to TSR, Inc. but was rejected.  What was America's loss is Japan's gain actually.  The series Dungeon Master wrote a RPG of his own to publish his world with -- called Sword World RPG.  The series was eventually released in America, though, on DVD as an Anime Series and not as an RPG Campaign (along with the series).  A sad thing, really.  After talking about Classic fantasy, I'm bringing up a High Fantasy world.  Now why would you think that?

The Record of Lodoss War and the Slayers, which will be detailed next, along with other anime set in the Western High Fantasy genre; are the inspiration for the Dynamic Spellcasting System.  Like I said before, the Spellcasting System is designed to replicate what you see in these sorts of Anime (and read in books).

It's a tradition now lost in the D&D RPG, since Wizards redesigned the system to take much of the wonder out.  The Powers System -- which doesn't fit High Fantasy at all -- is more of a fit for the Magical Girl genre of Anime.  Sailor Moon, Card Captor Sakura, and Sakura Wars fit Wizards of the Coast's new incarnation of the game more than Record of Lodoss War and The Slayers now do.  Eh, all in the name of Balance, I guess.

However, the Biggest secret of roleplaying isn't the rules; its the world and then the rules you make up as you go along.  You really don't need D&D to play Adult styled Make-Believe.  Just create a world and play as you go along.  The stuff that Wizards foists on gamers is really unneeded.  There are thousands of RPGs on the Market, and you can always make one up as you go.  The D&D game is just a start -- the idea is to figure out when you're ready to break through and go independent.
Posted by Elton at Sunday, January 09, 2011

Check out my article where I talk about Lodoss War. Man I loved that series! http://www.literaryescapism.com/16486/guest-author-kevin-james-breaux

How come I miss these comments? Oh, I expect them to show up within days. Sure.
:)