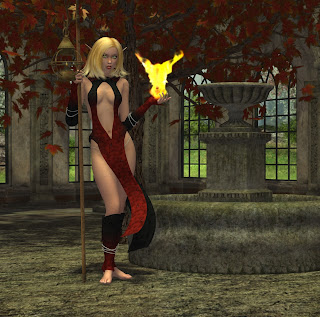 I'm sort of revising d20 Advanced Magic just because I can.  Why, pray tell?  Some people have trouble understanding how the system works.  I don't.  In fact, I playtested it with a group some years ago, and its very balanced in how it works.

d20 Advanced Magic is a spellcasting system that reduces spellcasting in d20 to a DC skill check.  That's pretty much all it does.  Although it does include a lot of math, people who are illiterate in their math skills will stay away from it.  That's okay, there is a system out there that is especially tailored to them.  They can play magical girls and boys using 4th Edition.


What people don't understand is how the paltry bonuses spellcasters get from their magical techniques, invocations, incantations, rituals, foci, and investments can possibly pass the spell DCs; and not suffer drain (non-lethal damage or energy drain) in the process? Note, a wizard casting a spell without these forms are dashing off their spell like a psion dashes off his psionic powers.

The quick answer is, you don't.  But the writers failed to provide examples explaining how their system works to everyone.  So in my revision, I'm providing some needed examples.  The system is for Pathfinder (surprise, surprise) but can work for 4th edition (if the Wizards, Clerics, and Sorcerer PCs are WILLING to be underpowered compared to the Rogue, Psion, Warlock, and Fighter classes -- but they get to use Skill Challenge checks on spellcasting WISH!)  The new book -- The Book of Advanced Magic preserves the system and explains it in simple terms using examples to bolster its case for adoption.

Also, I'll be providing some new feats (Divine Understanding is one of them -- the PC who has the feat understands What they Really Are and gains a +5 bonus to their casting checks.  This feat can only be taken at 1st level or the PC learns the truth about himself somehow [usually through Divine Revelation].  It's opposite - Rational Atheist - provides a penalty of -5 to their casting checks, but provides a bonus for casting Rational, Logical magic [Basically a PC will rationalize a Dragon into a crocodile]).

There are also going to be some new Prestige Classes.  I.e. the Quantum Mage (which requires the PC to have the Divine Understanding feat and have seven ranks in Knowledge (Arcana) and 3 ranks in Knowledge (Religion), and has a +5 spellcasting Bonus).  The Quantum Mage at level 10 gains the Wish and Miracle spells for free and has the Wish spell's DC reduced by 55 (the DC is 101) because he gains perfect Understanding of What He Really Is and can manipulate the Universe according to his will. (Under the usual spellcasting method, he doesn't have to give up the 25,000 gp diamond to cast Wish [Why a diamond?  Diamonds are carbon, people!]).

The whole idea of the revision is to provide players with a better system for spellcasting that is dramatic and fun at the same time! :)
Posted by Elton at Saturday, January 08, 2011

Interesting stuff. I'll be watching this closely - I'm all for crunchier magic systems :)