Bigotry still exists in our Country . . . 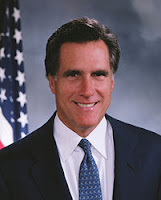 The Reverend Al Sharpton made a faux pas. Rev. Al Sharpton said, "As for the one Mormon running for office, those that really do believe in God will defeat him anyway, so don't worry about that. That's a temporary situation."

Presidential hopeful Mitt Romney [pictured] called Al Sharpton on his remark. Mitt said: "It shows that bigotry exists in some corners. I thought it was a most unfortunate comment to make." The Presidential hopeful further remarked, "I don't know Reverend Sharpton. I doubt that he is personally such a thing. But the comment was a comment that can described described as a bigoted comment. Perhaps he didn't mean it that way, but the way it came out was inappropriate and wrong."

Commentary: I find it unfortunate that the Reverend Al Sharpton had to make such a comment. The comment proves that there are misconceptions that still exist in the Bible Belt about the Church of Jesus Christ of Latter-day Saints. I believe that the comment was made in ignorance of Mitt Romney's faith and devotion to God. I have no doubt that the Rev. Al Sharpton is a good man. He just has some misconceptions about LDS Church. Fortunately, the good Reverend made a public Apology to the Presidential hopeful from Massachusetts.
Is the beliefs of Mormons like myself unique from mainstream American Christendom? In many ways they are. But in other ways, we believe in the same God, the same Creator, the same Savior, and the same Holy Ghost. We believe in the same teachings of the Master Jesus Christ. And many of us, myself included, believe that Jesus Christ is our personal Savior. What the Rev. Al Sharpton did was shocking to me.
Posted by Elton at Thursday, May 10, 2007