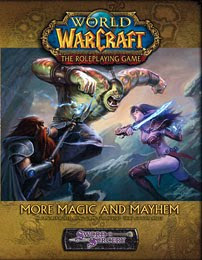 More Magic and Mayhem -- Guys and gals of 4th Edition fame, if you don't have this book, you are missing out on something very, very useful. The book has rules for creating alchemical elixirs, draughts, and transmutations and what you can create with the craft (alchemy) skill.

That being said, I recently received this book as part of the Necromancer Games' gift exchange. It comes in hard cover, and is about 200 pages of useful information for roleplaying spellcasters and engineers in the World of Warcraft using the d20 System. For once, I'm happy that this came out for the d20 System instead of the 4th Edition rule set.


The book is split into six parts. One deals with new classes, another deals with new feats, then new spells, new magic items, and finally engineered machines. All the spells dealing with World of Warcraft (the Old World) are finally included. Missing spells like firebolt, blastwave, pyroblast, and corruption are finally included. Beyond that, the book is useful out of WoW.

The Alchemy skill and the Enchanter skill are covered in grand detail. The Alchemy section covers everything that a player character can create relating to WoW using the craft (alchemy) skill. From mana draughts to healing potions, to transmutations using the philosopher's stone. At last, a PrC a friend of mine devised for Atlas Games' Occult Lore makes a huge amount of sense (the Grand Alchemist PrC) with these rules for Alchemy.

One interesting PrC is the Ley Walker. Now, I'm willing to bet that the PrC -- in practice and in theory -- is like the creature below. 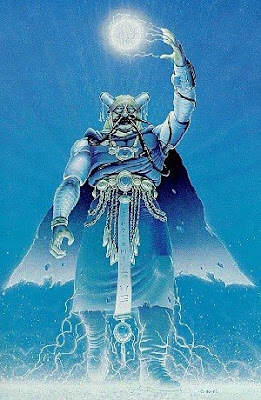 The book is useful for a World of Warcraft RPG game, and it is useful out of game. Aside from little nitpicks as missing armor items to editing; the book is chock full of information that can be used for a 3rd edition game, or with some work, a 4th edition game (some stuff can be used "straight out of the box," other stuff needs some WORK!).

That is my review for 4th Ed fans and 3rd Ed fans alike. My recommendation is to purchase a copy of this book in hardcopy or on .pdf since you are missing out on some goodness here. :)