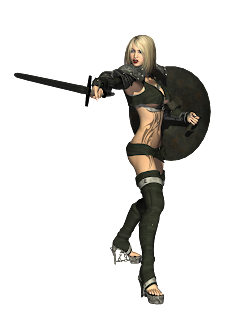 Sokka's master teaches him Calligraphy, landscape painting, and rock gardening.  And then begins to have him study swordsmanship.  After his training, the Master tests him.  Since I embedded the episode in question, you can watch it for yourself. The point I'm getting it is that a fighter need not train for one thing.  A swordsman is versatile, for a swordsman must know many skills to be versatile.  So, I thought, why not chase after this idea.  The idea of a sword style is to provide roleplaying opportunities in battle.  Artistic or not, the sword style is supposed to make you, the player, add flavor to combat.
Creating a style is easy using  the rules from Way of the Samurai.  With some adaptation, the rules can be adapted to 4e quite easily.  There are a variety of styles taught in Caithness.  From Orc swordsmanship, to fencing, to medieval European swordsmanship.  Some styles are fast, some are brutal, some are artistic.  Some deal mainly with offense, some deal with defense, some are very versatile.  Some styles deal with control (I thought of a style that combines Aikido with the Sword), others with defense, and some with pure strike value.  The point is to have fun with your game when you play in Galatea.  You can simulate a living breathing world, play in a movie, or just have some plain fun.  Galatea, when released, can be developed by you to handle any number of play styles.
Posted by Elton at Monday, May 03, 2010