NPC Spotlight from my Adventure: The Crystal Shard.  Today, I present Madame Bovary; a Warlock using the World of Warcraft RPG's class -- Warlock (technically, she'd be a witch).  In World of Warcraft, Gul'dan created the Warlocks; magic users which used demonic magic.  The modern warlock, however, seeks to control the demons and the power they use.  In my World, the Warlocks are basically the same; but they were given their secrets by Dragons rather than powerful demons from the Burning Legion (thus no Draenei). 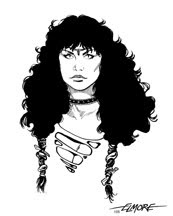 Key Info: Madam Bovary is the village warlock, one of the warlocks that completely disserted the Warlocks of Calais when they were battling the demons of Gehenna, the Land of Shadows.  She was only twenty-two back then, she’s forty years old now.  She left the group because she became disenchanted with the Warlocks of Calais and their thirst for power.  But she still trafficks with fiends.

Background: Madame Bovary is from the Warlocks of Calais.  Her real name is Marcelle Davereaux of Calais.  She was kidnapped from her parents by Corinne Davereaux and raised to be a warlock from then on.  She was indoctrinated in the knowledge of Demonology but was brought up without religion or spirituality.  At the age of sixteen, she completed her apprenticeship and learned how to bind an imp to her will.  Currently, she can bind a Shadow Demon, and a succubus bound to her will as well.  She gave up her Occitanian name and is known as Madam Bovary when she disserted.

Appearance: At first glance, Madam Bovary looks very good for a forty year old.  In fact, she still looks like she is eighteen.  Closer inspection means that she hides horns on her head and she smells faintly of sulphur.  If one is more observant, they might see the end of her barbed tail.  The tell tale marks of a Tiefling.  Her body is timeless, though.  She will never outwardly show any signs of age.

Roleplaying Notes: Madam Bovary makes a good link to the past.  She can also train Warlock PCs, but willingly she trains them.  She doesn’t kidnap children just to train them, as she had been.  She hasn’t had children, this is simply because she doesn’t want children.  She is also single.  She isn’t unpleasant to be around, but bringing up what happened eighteen years ago causes her noticeable pain.  However, the other villagers respect her even though she keeps to herself and hangs around the village graveyard outside the Church because people avoid the graveyard.  She has full knowledge of the Dark Arts (Warlock magic) and defense against such magic.  She teaches these to children who are willing to learn.

Augment Summoning: The character can summon more potent creatures with his or her spells.  No basic change.

Extend Spell: The character can cast spells that last longer than normal.  An extended spell lasts twice as long.  A spell with a duration of concentration, instaneous, or permanent cannot be extended. an Extended Spell has its DC increased by +4.

Magical Blood:  The character has magical blood and spellcasting comes readily. He or she gains a +2 bonus to Fortitude Saves against drain and control checks.  If Dynamic Spellcasting isn't used or Ad20M is unavailable, use Combat Casting instead.

Spell Notes:  Some spells are from the World of Warcraft RPG and More Magic and Mayhem.  Some spell names have been changed to protect the Innocent.


Dungeons and Dragons 4th Edition Conversion Notes: As you now know, the 4th Edition Warlock is different from the Warlock of WoW.  The WoW Warlock has a lot more flavor and is more in line with the Warlocks and Witches of History and Myth rather than the D&D Warlock.  The Warlock from WoW specializes in Demonology, Curses, and spells of a Destructive nature.  Converting the class would mean creating a new Wizard class.  Here are a few notes I came up with to guide you:

Shadow Bolt, Immolate, and Corruption become at will spells.  Shadow Bolt is similar to magic missile, while Immolate is similar to burning hands.  Corruption is a spell that deals 1d4 fel damage per around.  These spells are bread and butter spells.


All curses are per encounter.


Most of the Special Abilities of the Warlock become daily powers: Fel Companion and Enslave Outsider especially.  Best I can tell you is to play a Warlock in WoW or buy the WoW RPG and More Magic and Mayhem in order to convert the class more faithfully.