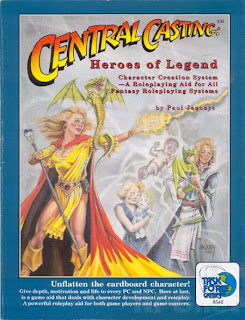 Basically, are your 4th Edition characters cookie cutter characters from a MMORPG?  Does your Pathfinder characters need a little more umph? Are you tired of playing characters that are bland and are a lot more like the stock characters of Shakespeare and hollywood movies [Prince John the Bastard of Aragon from Much Ado About Nothing, the local bum in Westerns, and the stereotypical mob boss in Crime movies]?  Do you want to inject more life into your characters besides playing a stock action hero?  Would you like to play something that isn't a trope?

Of course you do. :)  Central Casting makes it so that your life is easier in generating a background for your character.  In this case, Central Casting -- Heroes of Legend.  The first edition is 96 pages and includes several pages of tables to for this end.  The second edition is double this.  So far, for my cousin's barbarian sorcerer character we've discovered that he is --
1. human.
2. a Barbarian.
3. he's legit of birth.
4. His father went off on a mission for his god (probably idol worship) and never came back.
5. he has 3 siblings -- two brothers and a sister.
6. he was born second.
5. he has a friend, and his grandfather died of a heart attack.
6. And we still need to decide the religion of his wayward father and his friend and the Something Wonderful!

After that, we get into adult events and then we determine his alignment through his traits.  We still have to find out how he learned sorcery.  But all in all, it was a great way to cast his character.  Everything is decided randomly (old school, I know, but people tend to play the same type of character over and over; randomness injects a little more variety).   You use all sorts of dice -- d20, d4, d6, d10, d8, d12.  And you can randomly roll everything from culture (primitive, nomad, barbarian, civilized, decadent civilized), to race.  The table includes human, elf, dwarf, halfling, half-elf, monster -- which is further broken down to Beastman (centaur, minotaur, faun, saytr, goatmen, shifter, or anthro-animal), Reptileman (Dragonborn, Yaun-ti, lizardfolk, troglodyte, kobold, etc.), orc and half-orc.

The cultures are explained.  Barbarian isn't just a class, it's a culture--a lifestyle -- to Central Casting. Other tables include adolescent events, special events, apprenticeship events, several occupations, Enslaved, Imprisoned, ah -- Le Amour, to deities, to personality traits.  And GM specials (which the GM injects a little something special into a PC's life.)  A character is born through the use of this book!
Posted by Elton at Saturday, July 10, 2010

What's wrong with being a trope? Now being JUST a trope I can see, but I've often hit TV tropes to hunt for beginning points before fleshing out my characters.