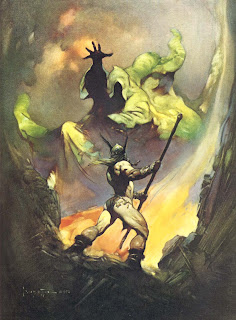 One of the best campaign worlds I've come across happens to be the Wilderlands of High Fantasy.  Man the campaign setting is completely creative.  There are red men, green men, men of all sorts of different colors (including the white, yellow, dusky, and black men of Earth).

The Wilderlands has a rich tradition of being descended from Conan, Gor, Barsoom, Jondor, Pelucidar, and other early sources of fantasy including Tarzan of the Apes.  Those early fantasies of the 20th century come out of the romanticization of the Stone Age (not including Tarzan).  Coming after the Wilderlands second is Forgotten Realms during it's 1st edition days.  Then Krynn, then Eberron, then Greyhawk, then the world of Warcraft.

Sword and Sorcery is a genre that comes out of combining a pseudo-medieval culture with that of the ancient ages and mixing in a little bit of magic.  Sword and Sorcery is gritty.  Sorcerers are often depicted as evil and magic as often as dangerous.  The hero is one with a sword or some other weapon out to destroy powerful artifacts of magic.

There are many tropes that were created because of it.  The chainmail bikini for instance is often attributed to Red Sonja, the She Devil with a Sword (it's actually a scale mail bikini she wears).  However, running a campaign in the Wilderlands requires some knowledge of how sword and sorcery works. 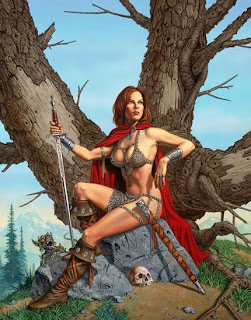 Running a Campaign: The Wilderlands is specifically designed for campaigning in the Fantasy of Yesteryear.  While you can use Conan the Barbarian RPG, I'm going to use Pathfinder. :)  This is going to be neat! :)
Posted by Elton at Sunday, July 04, 2010