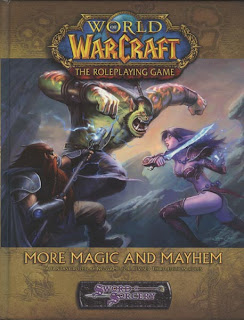 I had my first WoW game in quite a while with a good set of players.  It was the best game I had without planning.  The campaign is produced like a T.V. show.

Episode 1 --
"The Fainting Disease, pt. 1"
The First Episode was unplanned, do to me not knowing everything about the characters.  It's a formula episode: go to a dungeon and fight monsters.  The quest was to find the cure for a goblin's fainting spells.  As far as the priest wanted, it was a component from a ghoul; however someone else was involved.

Ako -- Troll warrior who is sexually attracted to his own sex.  Played by Zegai.
Alanasorel Sunsorrow -- a High Elf who declared allegiance to the Blood Elves.  She is a scout/tinker with a colorful past.   Played by Demona.
A Blood Elf Paladin -- Who is actually a paladin of Tyranny (a lawful evil paladin), but is acting like the stereotypical D&D Paladin.  Pious, hypocritical, arrogant, willing to KILL!  Played by Brandon.
Magnus -- Magnus is a Blood Elf Warlock who seems to be talented with speaking many different languages, he has a gift of tongues.  He has a companion, named Adjoa.  Adjoa is a female forest troll who is trying to work on Ako and get him to be with her.  Played by Shadow_of_Corgon.

She mentions that the disease can be cured by getting a piece of a ghoul at the ruins of Jub'al.  The PCs all band together, and they take Alanasorel's blimp together.  However, a powerful thunderstorm raged, and she wanted to fly through it!  The heroes had a trying time to fly through the thunderstorm.  Lightning had hit the blimp and caused it to list.  It also put one of the crew in harm's way as she threatened to fall into the ocean. They managed to save the crew member and continue their voyage without any more mishaps.

ACT II
They survived the storm and made it to an island inhabited by water elementals.  Here is where they met Alana's friend, who wandered on board topless.  She cursed, and ran downstairs and put something on more modest after realizing what was on board.  Ako also spotted an old enemy on the Island.  A warlock he tussled with.  He convinced everyone not to stop at the island.   Then the heroes continued on, driving through the air to the ruins of Jub'al.  The paladin, however, struck a "romance" with Alanasorel's friend.

The group made it to Jub'al and landed the craft.  Ako and the paladin, with a sore bottom because Alanasorel's friend had spanked him for inappropriate advances; disembarked and was attacked.  They were attacked by two ghouls and a Sea Witch.  The Sea Witch attacks with a dirt to mud spell, and caused Ako and the blimp to start sinking in the mud.  Avoiding the attack, the Sea Witch casts another spell -- lesser ice bolt; at the paladin.  The ice bolt strikes and reduces his movement by half. 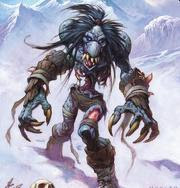 At this point everyone rolled initiative and we started combat.  The combat was fast and furious; but slow at play.  The Sea Witch took the brunt of the damage: she was bashed, burned, cut, and bashed again.  Also the ghouls managed to do an AoO on Ako.  But he was so well armored that they couldn't get through to him.  Finally, he critical striked the Sea Witch and a ghoul and managed to defeat them.  The other ghoul was dispatched by the Blood Knight paladin.  With their enemies defeated, they find out that the troll witch doctor Zulgordo hired the Sea Witch to slow down the goblin merchant or anyone affiliated with him.

Zulgordo managed to high tail it out of Jub'al to another ruin.  Although the right ghoul was found; the true perpetrator of the  curse or disease had eluded them.  The episode ended with everyone sure that they should pursue the malefactor.