The Caves of Chaos 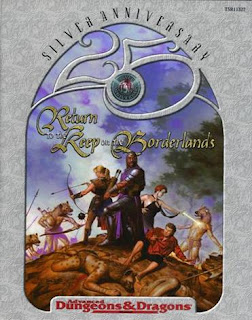 Finally we get the PCs up and going for the Caves of Chaos!!  It's finally happening, the PCs (well, 2 of them) are finally ready to go into the Caves of Chaos.  The problem seems to be that Rolemaster PCs at first level are woefully underpowered against their D&D counterparts.  For instance, at 2nd level, an RM magician gets a plasma bolt -- SHOCK BOLT -- it's called (in D&D 4e, it's an at will power called magic missile that clueless idiots get to cast at the Darkness every time they feel like it while their fellow player wants to do some chicks at the local tavern.  Stupid thing should be a DAILY power).  Ahem.

This is Rolemaster, not the cartoonish thingy of 4th Edition.  People get hurt.  People get maimed.  People bleed.  People get their limbs hacked off.  People get hit by Interplanetary bolts of lightning and light up like Christmas Trees.  That sort of thing.  So what is terrible about a D&D dungeon crawl when you rolemasterize it?  They, the players, are facing greater odds.  There aren't five gnolls that fall down every time you zap them, there are five gnolls that can really kill your character -- with experience comparable to level 1 D&D characters.  But there is a reason why the PCs are going into the Caverns of Chaos.

The Drow of the Underdark is infiltrating the government of Evereska.  They killed the Queen and they dumped her body in the Caverns of Chaos.  The elvish government need proof before they can act against the Drow in Evereska.  That proof, the body of the dead queen of Evereska, is in the Caverns of Chaos.  A place most sane people would stay away from.

Even if your players play fourth edition and have gnolls for breakfast.
Posted by Elton at Sunday, December 05, 2010