Setting Design: starting from the ground up.

So, where does someone begin when they make a setting for Pathfinder or for D&D (4e or any other edition)?  Everything every where begins as a idea.  Usually out of the Zeitgeist (there's that word again).  So you start with an idea.  Where do people get their ideas from?

How peculiar, then, that Michelangelo's  works showed up in Europe in the 16th Century, rather than ancient Egypt or Sumeria or Persia, or in the Lascaux Caves?  How “original” was Michaelangelo? He used the language and techniques of his time. He carried ideas passed to him by his neighbors. He didn’t create in a vacuum. [1]


Neither does the Dungeon Master.  To say a setting like Glorion, or Eberron, is original is to be conceited.  Eberron has strong Steampunk roots.  Something you get from Gibson's writing about how Babbage's calculator machine had become common place, or Sony's Steam Boy. Glorion draws heavily on several tropes in the Genre.  Especially some Tolkien, making it an unremarkable setting for some (especially me).  I want to do something REMARKABLE, different, and . . . as I said in my previous Essay . . . obvious.

I've written on numerous occasions about orcs on this blog, and while they are all cool, I didn't pay enough attention to humans.  How can you get orcs and humans to interact and make humans interesting to play at the same time? (I'm currently playing a Worgen mage on World of Warcraft, and I've become sick of how clichéd the humans are).  I want something not a cliche for my humans.  With several tribes of orcs, all different, they don't need a culturally homogeneous human race to fight against.  Not every human nation needs to be a knock off of High Middle Ages England with American Accents.  In a sense, Tolkien has dominated American fantasy . . . with a few off shoots like Mar Barker or John Norman, for a very long time.  It's like we are in a dark age of American fantasy and dreams -- Tolkien, who is acclaimed as a genius, has been copied.  Copied! so many times that many of the things you see in a present day American Fantasy novel is full of clichés.  What happened to Edgar Rice Burroughs or Robert E. Howard? 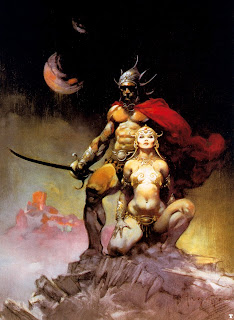 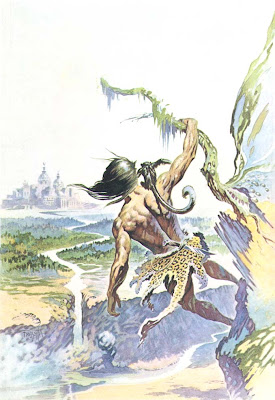 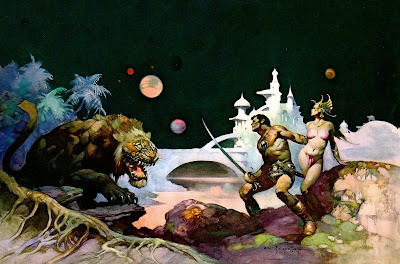 Where does one turn to get ideas to set up a remarkable campaign setting?

to create interesting nations for the orcs to fight and contend with, I go by a few simple rules:

* Don't look at Tolkien.  Tolkien, while original in his day in creating a Myth for his time, has been copied so much that many of his work has become clichés in D&D settings the world over.  Tolkien can be admired for a source of inspiration, but not to take whole Cloth.  Like Disney did when they crossed out the Roman Portico for Atlantis, I have to cross out Tolkien.


(Anything with Sinbad is good, even the T.V. series).

* Ray Harryhausen is the seminal inspiration for a generation of filmmakers.  He revolutionized the special effects industry until computer graphics dominated the scene.

Ancient History and the Bible.

All of these used to contain clichés, but now not a lot of people know about them or read about them.  They are often locked up in stupid Copyrights that are jealously guarded by people who have either lost their talent, or they sit on their Grandfather's legacy and rip the rewards.  ( Copyright is a bad thing).

And the bible?  Hardly anyone makes movies from it anymore.  Despite historical accuracy; although Samson would be great to make a movie about (everyone loves an Anti-hero).

So, to create something remarkable you need to get off the beaten path.  Tolkien has been, to put it nicely, copied to death.  There's loads of literature to draw your ideas from -- the above is just the tip of the iceberg. To create your setting, you need a hook or an idea.  Stay away from what everyone else is doing and look at everything else no one else is looking at.  Even if it's a series about Gor (John Norman), Conan the Barbarian (John Howard), or Sinbad (1001 Arabian Nights).
Posted by Elton at Sunday, December 26, 2010

who needs trolls and ogres, when you got
T-rex and velociraptor ?

Yep, I read part 1 of the Pellucidar series. :)