This page updates the Worgen to Pathfinder.  Enjoy. :) 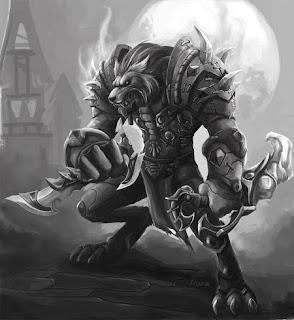 The Foresaken fear and revile the Worgen, and the Foresaken Queen Sylvanas Windrunner has marched an army upon the Gilneans and the Greymane tribe of Worgen (at the orders of Garrosh Hellscream). To help fight the Foresaken, a secret druid sect within Darnassus had come to help the Worgen. The Druid sect bring Druidism to Gilneas, which a significant number of Worgen embrace.

With the fall of Gilneas to the Cataclysm, most Worgen and Gilneans escaped to Darnassus with their king, King Genn Greymane.  Lord Crowley and a few stayed behind and made alliances with the Worgen pack in Silverpine Forest in order to free Gilneas from the horrors of the Foresaken.

Classes: In World of Warcraft and true to their humanity the Greymane Worgen can become mages, warlocks, warriors, priests, and rogues. The Gilneans also study druidism and know how to hunt. As hunters, their beastial natures can aid the Worgen in their relationship with animals. Especially wolves.  A significant number of Graymane Worgen are barbarians because they give in to their animal natures, however not a few are Tinkerers (engineers).

Faith: The Light and the Wyld. Some, or most of the Gilneans still belong to the Church of the Light. The Church of the Light thrives among the Worgen as part of the human heritage. However, Gilneas is the only human kingdom who had humans trained to respect nature. The Druidic Worgen embrace the Wyld and lead a good number of Gilneans to spiritual peace with Azeroth.

Strength +2, Constitution +2, Charisma -2. Worgen are mighty, but their bestial natures detracts from their reasoning and their social interaction.
Medium: as medium creatures, the Worgen have no special bonuses or penalties due to their size.
Worgen land base speed is 30 ft.
Shifting (Su): A Greymane worgen has two forms: human and worgen. The base form is worgen. As a standard action, a Greymane Worgen may shift from human to worgen or from worgen to human. This can happen at anytime of the day, thanks to druid Magic and Alchemy. The act of shifting from human to worgen transforms the human into a monster, and gives the worgen the barbarian rage.
Access to Shifter feats: A worgen may gain access to the Shifter feats presented in Races of Eberron and the Eberron Campaign Setting, and may take the Shifter traits of Longtooth, Wildhunt, or Dreamsight.
Claws: The claws that the Worgen has offers 1d4 pts of damage in an unarmed attack.
Low-Light Vision: In Worgen form, Greymane Worgen can see twice as far as a human in starlight, moonlight, torchlight, and similar conditions of poor illumination. They retain the ability to discern color and detail under these conditions.
+2 racial bonus on Balance, Climb, and Jump checks: the Worgen's bestial nature enhances many of his physical skills.

Also, the Worgen may take Worgen levels to tap more fully into his Worgen heritage.

Typically, a Greymane Worgen is a human who has been once bitten by the worgen that overrun Gilneas.  The wound festers with active druid magic, changing the human and linking his spirit with that of the Wolf.    There are three levels of the Greymane Worgen class that allows the human to tap the beast and gain some of the powers of the Wolf.

Weapon and Armor Proficiency: Greymane Worgen with levels in only "Greymane" are proficient only with simple weapons, firearms, and the ability to use light armor.  This list excludes all crossbows.

Reactive Shifting: You can shift from human to worgen as an immediate action.  This allows you to shift even when flatfooted or when it is not your turn.

Worgen Instincts:  Tapping into your animal side grants you a +1 bonus on Perception and Sense Motive checks, and a +2 bonus on Initiative Checks while in Worgen form.

Wild Run: While in worgen form, you can run on all fours like a wild dire wolf and cover great distances.  This increases your overland speed to 250 as long as you are on all fours.

Worgen Ferocity: Greymane worgen are tenacious combatants, and you are no different.  While in worgen form, you continue to fight without penalty if you are disabled or dying.  So, when reduced to 0 hit points, you can act as if you weren't disabled.  You do not use one hit point for performing a standard or otherwise strenuous action while at 0 hit points.

When reduced to -1 or -9 hit points, you don't fall unconscious.  You do not automatically lose 1 hit point each round when at -1 to -9 hit points.  However, when your current hit points drop to -10 or lower, you immediately die.
Posted by Elton at Friday, October 21, 2011