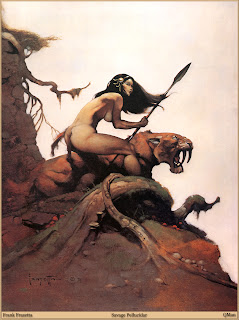 Because of complaints, I'm adapting Edgar Rice Burroughs' At the Earth's Core to the Silver Screen while I work out another story of Atlantis.  ERB produced some of the best fiction of his day.  Although my brother continually claims that Greek myths and Homeric poetry are superior to anything we can storycraft.  I don't know whats with him.

At the Earth's Core presents the idea that the Earth is hollow.  Hollow Earth theories compete with present accepted theories that the Earth is a solid sphere.  However, legend and a few others say this isn't at all so.  The hidden Lemurian kingdom of Agartha is the hollow world.  Also, a hidden kingdom of our brethren -- the Ten Tribes of Israel, is also in the Hollow World.  The Ten Tribes of Israel is ruled by a High Priest; while Agartha is ruled by the Luminari.

But I digress.  At the Earth's Core isn't about Agartha or the kingdom of the Ten Tribes.  It's about Pellucidar.  And its an awesome story to adapt.  Not to mention it's one of ERB's stories that was published before 1923. :)
Posted by Elton at Wednesday, August 11, 2010