I signed up on Scripped.com and started writing the movie: Atlantis.  No Sea Devils yet, but you can be sure that they will show up.

Some notes:
Wizards and Druids = the Wise.  I don't want to call them wizards or sorcerers, I want to downplay it as much as possible.  The Wise are capable of casting magic.  There are different traditions that the wise follows.

There are scientists in the script, and it seems to be focused on science.

Priests = They are also part of the Wise.


I've got three pages done already.  I'll be adding more later.  The script has the feeling of "Star Wars under water."  In other words, the storyforming process demanded a story focused around an event rather than a character, an idea, or a world.  The movie should be science fiction rather than fantasy.  Oh, and meet the antagonists of this movie: 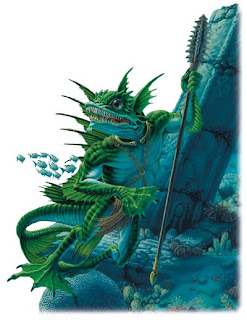