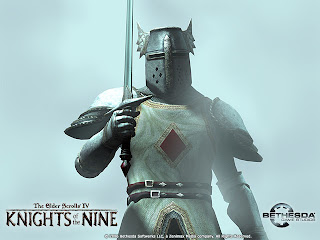 It's been oppressively hot, but I found out about a mod for Oblivion I wanted to try.  It's called Ruin-Tail's Tale and by gum the man was inspired to write it.  Basically, its about a companion for your Oblivion character named Ruin-Tail.  He's an Argonian (lizard-man/fok) who is tortured by morality and his conscience.  He left his sect of Dark Brotherhood and sought freedom.  You run into him, and you start your adventures with him.  The tale can turn into one of "infamy", "Friendship," or "Romance."  When I was playing it, when it came to go "romance" or "friendship", my character was blind-sided by Ruin-Tail's declaration of love (or as near as he could get to it).  Relunctantly, my character confessed he shared the same feelings.   However, there was no way of explaining to Ruin-Tail that my character preferred to have a Platonic Romance over an erotic one.

The mod is based on Wiedu's mod Soulefein for Balder's Gate II.  The writer felt that a companion with an engaging storyline is better than most companion mods.  You get a companion, he or she fights for you, and you don't really build characterization.  Ruin-Tail's mod is really high quality, and the best mod I've seen for Oblivion.  And it is an old mod.

The story presented in Ruin-Tail's Tale is a love story.  Whether you follow "Romance", "Friendship", or "Infamy," it's classified as a love story because of the deep friendship both of you build together.    it is also tragic since Ruin-Tail and you split up at the end of his tale.  I love the mod, myself.  Morrowind mods don't reach this kind of quality.  At the end, I was thinking up a novelization of the mod about my character's and Ruin-Tail's exploits told in a series of books for Oblivion, meant to be added after the Ruin-Tail's Tale has run its course.

There is nothing gross about the mod.  I checked the dialogue and there is nothing there that is too deeply suggestive.  However, this is probably something that can only happen in a game like Oblivion.  Love story plots in D&D is often hard to run let alone write.  The reason why Fear is so popular to inspire is because most DMs and Players fear love stories.  It's either not manly or they feel it intrudes on them somehow.  Quite frankly, I don't blame them for feeling this way.

But it is the best mod for Oblivion I played with Companions.  And it's done so well it's a wonderful mod.  It's both great and sad that it's unique.

Next: Romance, the tale of Ruin-Tail and the Crusader.
Posted by Elton at Monday, August 02, 2010