(Note, Phoenicia is designed to be dropped into your campaign, so you can change this history around to make it fit.)

The Place that Phoenicia stood upon used to be the site of a paleolithic settlement.  During the Golden Age, there was no escarpment, no cataract falls.  The humans who lived here could find everything they wanted to eat.  There was no want, and there was no cares.  The bands of humans that roamed the planet were like the African Bushmen.   And the planet was covered with a Canopy of clouds.  There was light all the time and there was few dangers.

The Artists of the Mesolithic Age were realists.  They painted the herds they followed and the plants they foraged.  Garments, if any, were of simple rough design.  Then, one day, everything changed.

Something happened that caused the clouds to part and the canopy to show.   The Atmosphere was made totally transparent and the Eye of God showed in the north.  The people were mystified, astounded that they could see.  A sun, and a motionless lesser light -- the Eye of God.  Every once in a while, people could hear the name of the Creator rumble across the skies. 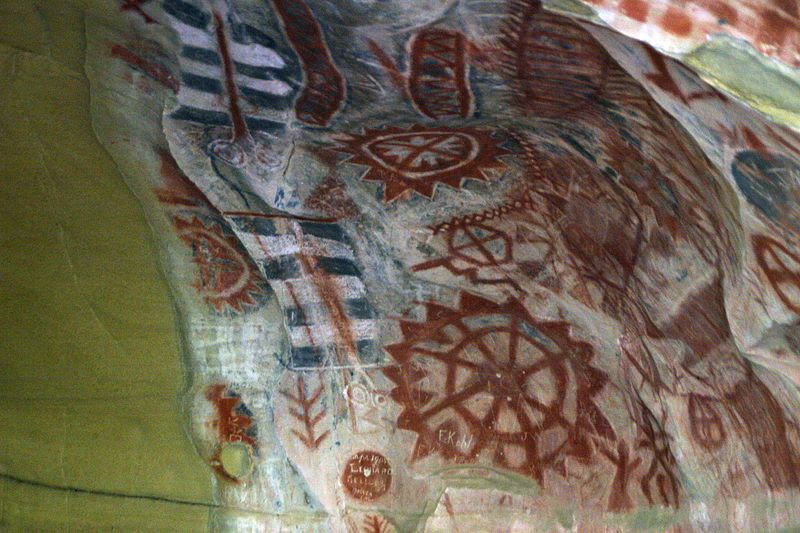 It was about this time that the Atlanteans and the Lemurians came through several transdimensional gates and conquered the Neolithic peoples of Terre.  The Atlanteans came fleeing disaster of their own.   They conquered, and on the site of Phoenicia built a pyramid of black glass.  The Lemurians and Atlanteans introduced psionics and psionics had become the dominate way of power.  Pyramids around the world became psychic resonators providing power to many cities of Atlantean and Lemurian design.


THE DELUGE AND ICE AGE

Soon, endless wars broke out and there was great violence on the face of the Earth.  Water rained down on the Earth from the God Star and covered the whole planet.  The Lemurians and Atlanteans fled into the inner world, to escape the Deluge.  No one else could.  While only a small percentage escaped by hiding in the hollow world, the deluge wiped out everyone else.

Mankind did survive and recolonized the land, but some of the pyramids were malfunctioning and most were dead.  The malfunctioning pyramids opened up gates to other worlds and let the races of the Elves, Dwarves, Halflings, and many others through.  With so much competition for resources, the humans faced the deserts.  When the water drained, Mankind built a new life for themselves through the short ice age.  The skies, however, was forever --- CHANGED!  The God Star broke up into three different planets, and faded into the distance.

Phoenix, and his brothers Sardis, Timath, and Thoraz brought their families here to settle.  The Escarpment appeared during the draining of the land, and a river fell through the escarpment some 500 feet in several places, creating a cataract.  Phoenix led his brothers here because he was having dreams of this place.  A place to found a city.

Phoenix and his brothers built a collection of huts below and north of the cataract.  However, his brother Sardis died of drowning in the river six months after they settled so they named the river after him -- the River Sardis.  The settlement became known as Phoenicia.

The Phoenicians traded with the Wildstone Dwarves and learned how to make swords and other items from stone molds.  They built a small nation composed of five other cities.   They traded with the kingdom of Khemet, and was on the first Silk Road.  The Phoenicians became prosperous and built a mighty city.  However, the Desert Elves came and destroyed much of the city.  They built a Second city (Phoenicia II), but had to abandon the site after two hundred years since a mighty flood of the Sardis river.

MIDDLE AND LATE BRONZE AGE
A new wave of humans came and built a third city on the ruins of the first and the second, Phoenicia III.   Phoenicia III was when the area above the Escarpment was first settled.  Phoenicia III lasted until the End of the Bronze Age.

At the end of the Late Bronze Age, the Vedans came.   Displaced from their own kingdom by invaders, these thousands of "refugees" came and sacked the city.  The entire city was burned and much of the city collapsed.  Then the Bronze Age ended with great catastrophes.  One day, the sun was motionless in the sky.  The effect was great changes around the world.

THE IRON AGE TO NOW
The Vedans occupied the Southern Upper quadrant of the city and rebuilt the city, creating Pheonicia IV.  The entire city faced a renaissance of psionics.  Although wizardry was being built through the world, the Vedans felt that they had to come here to practice their psionic disciplines.  Psionic technology was slow coming.  However, the Kshatriya King wanted to rule forever.  He developed the process of becoming a psionic lich and perfected it.  He was the first psionic lich, and he ruled for 500 years before being forcibly deposed and buried undead in his own crypt.   The king's name was Damodara.  However, during his reign, the first undead stirred in the Necropolis.  Although stories of Vampires were already circulating, the dead became restless during those five hundred years, and when Damodara was buried, the dead relatively quieted down.

It was then that descendants of the original Phoenicians came and conquered the city, turning it into a Persian like city.  While the Vedans were allowed to keep their cultural identities, many of the invaders came and repopulated the city.  They built a new Phoenicia and maintained the beautiful city for four hundred years, when the Hellenes came.


THE INVASION OF THE HELLENES

Because the empire to the east was crumbling, the Hellenes came and invaded.  The phalanx rows came to fight against the armies of the Empire, and the group managed to conquer Phoenicia.   Several parts of the city were razed and many of the people were dispersed.  The Hellenes returned and rebuilt the city.

Or the city didn't really have time to flourish, until now.  Ten years ago, treasure seekers delved into the undercity and the dungeons below the city -- composed of five, maybe six, different cities in Ages past.  When they returned with treasures untold, it started something that could lead to a true flowering of this city.
Posted by Elton at Friday, May 06, 2011