The Orcs of Galatea are seen as fearsome and brutal opponents by the Gray Queen of the High (Pelagsiri) Elves and the Humans of the Known World.  The humans believe that orcs are the offspring of Heracles -- their national hero -- and the nymph Draeneroe, one of the Hecaterides.

The elves believe that they are the offspring of Loricen the Hunter, one of their Gods who was corrupted by his very nature.  The Ironhammer Dwarves are much, much more pragmatic.  Their histories tell that the orcs came from another world to spread their viciousness and bloodthirsty ways of conquest.

The truth, is of course, stranger than all of these.  First of all, the orcs are from another world.  They are from the same world as the orcs of another forgotten realm.  Although they worshipped a God of Conquest, the revelation that he was a demon had the result of orcs returning to their Shamanistic ways -- the ways of the Heathen and worship of their Ancestors.

Heracles, however, did have a relationship with the orcs.  He traveled to the Hordelands to complete a particular labor, and the Orc Queen at the time -- Draeneroe of the Silverfangs, did become enamoured with him.  She demanded that he would be her Prince Consort for a year and a day before he could complete one of his labors.  Heracles complied and gave her two children over two years of staying with her.  Her two children sired by Heracles -- the half orcs Drocan and Trizgu'ul, became the Princes of the Silverfang tribe and the Blood Talons.

As for the Elven legend, the Orcs of the Hordelands claim descent from the Lost elven nation of Gilmaris that used to occupy a part of the Hordelands.  What possessed the Elves of Gilmaris -- a nation of Amazon Elves -- to intermarry with the whole orc nation?  Simple.  The elves of Gilmaris were made up of all women and they needed to propagate.  Instead of the Elven men of their nation, who joined Pelagsus and his tribe of elves for want of affection, the Gilmaris elves turned to the orcs.  Over five generations, the whole of Gilmaris had become all orc -- creating three small tribes and spreading a hint of Elven Blood across the orc population.

The orcs of the Hordelands are brutal in combat, their elven and human bloodlines has granted them a feral grace an a brutal passion that compares to the best Elvish Duelist and Human Swordsman.  People on the outside believe that an orc relishes in Battle, however in truth orcs are a peace loving people if ugly.  The fact that they fought with humans and elves when they came from their world in an attempt of world conquest has made them bitter enemies of elves and the humans.  Despite their periods of barbarity, they are a peace loving people.

On their native world, the Orcs lived peaceful lives as shamans and ancestor worshipers.  They learned to regard the Land and to at least revere the Spirits of the Land, the Water, and the Sky with respect if not outright reverence and worship.

Back then, the orcs lived a quiet life.  Their technology staying at the Bronze Age or at the Copper Age for a good, long time.  Their native world was a peaceful place -- and orc artists concentrated on realism in their rock paintings and rock art.  The orcs hunted the graceful tabulk, the mighty roe buck and hart doe, and followed the migrations of buffalo, bison, and wild cattle.  They became wanderers, peaceful and loving.

However, everything changed when one shaman had a vision.  A vision of a God that will lead the orcs to conquest and glory.  Called the God of Conquest, the shaman became the defacto leader of several tribes and started turning them into warriors with no parallel.  The shaman's name was Talun-karku, who was also famous for having twenty wives and creating the entire Shadowclan through his descendants.

Talun-karku introduced his new magic, the magic secrets he received from the God of Conquest, which was abhorent to most orcs.   However, the magic was also alien and demonic, as practice of the fel magic spread, the orcs had changed irrevocably for the worst.   Their skin turned a greenish color, and they had become more ferocious in time.  When the orcs were ready, the God of Conquest forced them to drink his blood, making Talun-karku's orcs absolutely bloodthirsty.

Then, the gates opened to other worlds by the fault of the Lemurians placing a Black Pyramid on their native world; and the orcs used it to spread across the Universe.  Several worlds were conquered, and several worlds slaughtered them.  And on other worlds, such as Galatea, there was a stalemate.  The orcs weren't slaughtered, nor did they conquer much of the land.  Still, an uneasy stalemate exists on these worlds.  But the orcs never did reach Earth or countless other planets.  The Orc War machine grinded to a halt in several Galaxies -- including the Pegasus Galaxy and the Andromeda Galaxy. 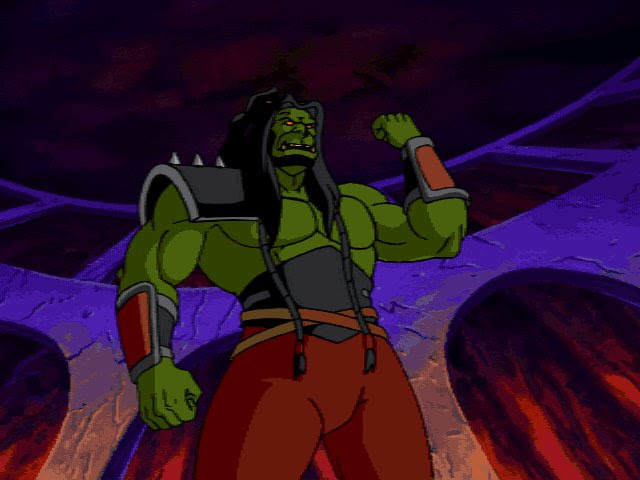 After two major wars with the humans and elves on Galatea, the orcs of Galatea found out that a demon was their God and rejected him and turned back to their ancestor worship.  They realigned themselves with the totem animal of their tribes and started revering the spirits of the land once again.

Incidentally, not too soon afterwards, the hero Heracles had come into the camp of the Silverfangs on a labor to atone for the defeat of his city state and the death of his queen.

His labor was to bring back the Bull of Kamador.  However, the Silverfangs had "conquered" the land of Kamador a long time ago and Heracles became the Queen's consort for two years.  She bore him two sons.  Drocan and Trizgu'ul; who went on to become the leaders of the Silverfangs and the Bloodtalons.  Heracles continued onward to find the Bull of Kamador and bring the bull back for completion of his labor (the bull died three months later of old age).

Many generations have passed, and the Orcs have discovered how to make steel, ride chariots, and tame horses as well as raptors and wolves.  Every once in a while, the orcs raid human and elven settlements; but it isn't enough for the two nations to launch full scale offensives against the orcs.  The orcs are content to live in yurts, make clothes, and continue their existence as nomadic herders and hunters.

Nice research! Is this created by your thoughts? we are the Orcs in the realm of Ravina playing the Dragons of Atlantis on Facebook-